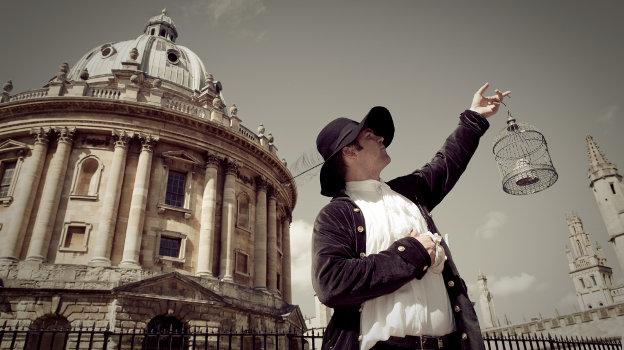 Mapping Wonderland sits interestingly somewhere between a historical walking tour and a site-responsive performance, feeling at home amongst Oxford’s tourist trade whilst retaining a frisson of adventure. Beginning in Radcliffe Square and taking in the back streets of Oxford city centre, Under Construction’s fourth performance to date passes you from host to host, each one selected from lesser-known historical figures tied (in some cases literally) to the spaces of Oxford. Experimenter with noxious gases John Haldane, who journeyed into the depths of Oxford’s subterranean streams, is one of the more intriguing; others include Christopher Wren, his sister (and “she-surgeon”) Susan Holder, and Fantasy writer Naomi Mitchison.

Each host regales you with short tales of their times and fascinations, recounted in an odd mix of verse and prose that, with mixed success, tries to provide both facts and flights of fancy but which few of the performers really get on top of. The most successful moments come when the performers relax with their audience, avoid grasping too hard for our interest or the role, and revel in the spaces in which they stand. Jeremy Allen as Haldane manages this best in conjuring up the madcap quality that has been a part of Oxford since the inception of the university.

The route the work takes uncovers some interesting back corners of the city centre, and succeeds in drawing your eye to the differences of architecture and style that abound in the back lanes and along the city wall. There are some deft touches from the company, including tiny figures resting by a ventilation grate that we stumble upon, but these are few, and consequently the work tends to vie against the spaces it inhabits. Thus there is a discordant feel that echoes throughout the work without establishing itself satisfactorily as a device.

With more rigorous development Under Construction’s bold work with spaces has the potential to be richly rewarding.