Casus, The 7 Fingers, Paper Doll Militia, and Jess Love – all are circus artists exploring the interplay between circus and theatre, all in very different ways, as seen at the Edinburgh Festival Fringe 2018 by Dorothy Max Prior

So, you’re a circus artist or company. Do you make shows that are pure circus, – a series of acts, perhaps pulled together thematically, but without an overarching narrative – or do you aim to make a show that tells a story?

Let’s say straight away that the body always tells stories. Even the most straightforward circus show contains mini-narratives in every act. Bodies are gendered, of a specific age, bearing evidence of their culture and experience in life. And circus acts are intrinsically theatrical. There is no more drama and conflict possible live on a stage than that which occurs when a human body goes up against another body or a piece of equipment. And we, the audience, construct narrative all the time. We see a large male body throw a slight female body in the air then catch her, and that says something to us. (Not necessarily the same thing to all of us!) We see a woman carry a man on her shoulders – another story.

But let’s go beyond the assumption that narrative is everywhere and look at what happens when a circus-trained artist or company chooses to create a show that, as well as telling myriad tiny stories, also has one big narrative or major theme to explore, integrating circus skills and storytelling. Four shows seen at the Edinburgh Festival Fringe 2018 do just that. Interestingly, all four use autobiographical / biographical material. 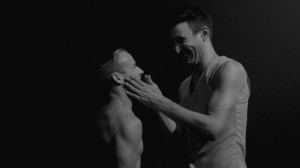 Casus’ You and I is devised and performed by two of the company’s co-founders, Jesse Scott and Lachlan McAulay, who have taken the (some would say brave) decision to explore their real-life relationship onstage. The show is a very welcome addition to the company’s canon, and the circus skills on show are of the same superbly high level as seen in this ace Australian company’s previous works, Knee Deep and Driftwood. The set evokes a homely interior – a big wooden table, a rug, a side-lamp, a trunk. These two have a beautiful chemistry and complicity – they have worked together as base (Lachlan) and flyer (Jesse) for many years and that experience shows in everything they do. Learning that they are partners in life as well as work adds an emotional frisson to the honed perfection of acrobalance/hand-to-hand duets that explore push and pull, give and take – relying completely (of course) on trust and closeness. We are also treated to a stunning solo trapeze piece by Lachlan that seems to explore the tug between the need for togetherness and solitude, and (towards the end) a doubles trapeze act to die for. Theatrically speaking, there are some good choices and some not-so-good choices. The use of tango as a recurring motif representing their personal passion is a great idea, but the dancing is stiff and unyielding. On the other hand, a disco-dancing scene in which the trunk is unpacked and the men explore the cliches of gay masculine identity, pulling on and off sparkly dresses, sailor suits, sequinned shorts, and black vinyl harnesses, is beautifully enacted. It is often the small, quiet theatrical touches that give You & I its power as a piece of circus-theatre – the two lying spooned together or piggy-backed, holding hands, or one stepping back and sketching in a journal while the other one takes the stage. A slow and gentle tumbling scene using flashlights is a particularly gorgeous moment. 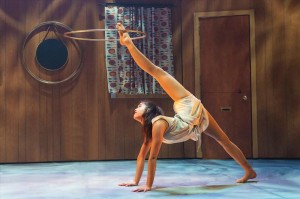 Les 7 Doigts (The 7 Fingers) hail from Montreal, and are firm favourites at the Edinburgh Fringe, having first captured audience’s hearts with Traces. Their latest show Reversible is here receiving its UK premiere. It’s an episodic narrative, telling stories of immigration, hard labour, housework, selling yourself body and soul, changing identities, mail-order brides, settling in to new lives, troubled romances, street-life hassles, and friendships. The stories are harvested from the nine performers’ own family histories – at the heart of the show is the notion that where we come from (historically, geographically, genetically) makes us what we are; and that above all, that we all need to feel that we ‘belong’ somewhere. The notion of ‘home’ is never far away. ‘We are not that different…’ says one performer into the mic. (This soulful taking turns on the mic is very much a & Fingers thing!) The set is a large structure of four moveable blocks/walls that make a row of house exteriors or interiors, or any combination of those needed for any one scene. We have exquisite circus skills – soft and sumptuous balances on canes, fluid object manipulation in which juggling meets dance, some fabulous teeter-board that emerges from behind the houses (so at first we think it might be trampoline), and some breathtaking Chinese pole work in which two couples (male, female) swap in and out seamlessly. Oh what a pleasure it always is to see women on Chinese pole, traditionally the most ‘masculine’ of equipment.

The acts are embedded within the stories – sometimes words are spoken to-mic, sometimes there’s recorded voice, often just music with the narrative living in the performers’ bodies. Each circus set piece evolves from physical theatre work that often echoes that of Lecoq-trained companies such as Gecko – group ensemble exploring hero-chorus; clever movings in and out of doorways or windows or through pieces of set that are in the process of transformation. Sometimes the scenes are straightforward in their meaning (a man works with a German Wheel whilst we hear the story of his grandfather’s life on the treadmill); we here the song Life Goes Down on the soundtrack as someone steps back from the washing line to keeps all the balls in the air. Others are more oblique – such as a lovely little interchange between a Spanish-speaking woman standing outside a doorway with a handbag full of keys and a silent broom-wielding man. ‘Donde esta mi llave? a no, yo tengo una otra…’ as she flings them all to the ground. Keys have such significance – our security and all our notions of ‘home’ held in these tiny pieces of metal.

Reversible is a truly delightful integration of circus and ensemble physical theatre work. The ending is a little too cheesy for my taste, but I’ll forgive them that. 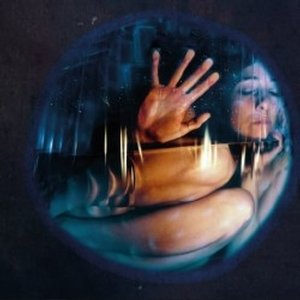 At the other end of the production spectrum is Paper Doll Militia’s Egg – a small-scale aerial-theatre piece by Sarah Holmes, who has written the show, and performs it accompanied by musician/composer (and occasional onstage performer) Balazs Hermann. It is a highly personal and thought-provoking exploration of female fertility, sexuality and choices in parenthood. The question asked, throughout the piece and in numerous ways, is: What does it take to make a baby? Good timing? A drunken night? The right partner? The right body parts? What if it doesn’t happen; if no amount of planning or choosing results in the desired child?

Meet Carole and Sarah (who may well be a younger Sarah Holmes, as this is a true story, although one doesn’t like to assume). Carole desperately wants a child, a desire that drives her to an agonised rant against a young mother in a park who is smoking and feeding her baby Coca Cola. She knows she’d be a far better mother! Sarah is her best buddy, and there comes a point where Sarah agrees to donate her eggs to Carole so that she and her husband can have the baby they are so desperate for. She may as well have them, I’m not going to use them, says Sarah.

The story is told using very adept aerial work, live music (double bass, guitar and electronics), a clever visual design cum installation (using cellophane, clear plastic and perspex, and a range of black and white shiny patent shoes), multimedia (some very lovely projected animation onto the double bass, for example) and spoken text. It’s this final element that is the most troublesome, for although the story of the two women’s journey, and the interweaved facts and theories about fertility, are highly interesting and informative, the text is a little overwritten, and its delivery not as strong as it could be. Sarah plays all roles, mostly – Carole, Sarah, the doctors and nurses, the consultants – with an occasional walk-on part as silent husband or doctor for Balazs. But the physical work is really strong and staged in an innovative way that dramaturgically links very well into the subject of the piece – images of eggs, ovaries and foetuses abound.

We enter the space to see Sarah cocooned inside a pod of water, and later we get a silks-style aerial section using two enormously long swathes of polythene that end up wrapping her like an embryo; a rope scene using bunches of plastic cords that look like giant catheters or intra-venous devices; and there’s a really disturbing contortion into a perspex box. When she lies curled up in foetal position on a white plastic disc on the floor, howling in agony after the removal of her eggs, we really and truly feel her pain, and recognise the extraordinary gift she has made to her friend. It is in this physical work that Sarah excels. I feel this might have been stronger as a two-woman piece, taking the pressure off Sarah to be (almost) everything at all times. Or if she really wants to be the only woman on stage, in multiple roles, perhaps a reduced text and/or more use of recorded text/sound in some scenes would have done the trick? Regardless, an adventurous and highly interesting piece of work from one of Scotland’s best aerial artists. 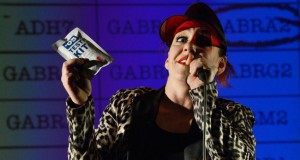 From Scotland to Adelaide, and the exuberant and rambunctious Notorious Strumpet & Dangerous Girl. The ‘notorious strumpet’ is Julia Mullins, a thief, prostitute and drunk who arrived down under as a convict; and the ‘dangerous girl’ is her great-granddaughter Jess Love a ‘Carnie and a a queer’ who likes a drink. Likes a drink a little too much, in fact, and the show is framed as an AA meeting. There’s tea and biscuits as we come in, and Jess starts the show with ‘My name is Jess Love and I’m an alcoholic’.

What follows is a high energy take-no-prisoners exploration of life on the road as a circus and cabaret performer who stretches herself so far to the limits and takes so many substances into her body (banned and otherwise) that she is on the brink of death on numerous occasions. The integration of the harrowing autobiographical confession and the circus work is excellent: Jess doing a hula hoop act that descends into  a staggering burlesque number; Jess drunk and disorderly on the trapeze (a perfect demonstration of that difficult art to master, clown trapeze); Jess balancing along a row of champagne bottles. Jess is a highly personable hostess, and deals with her audience interaction confidently.

But there are some things that could be better. The structure sags a bit. We seem to be coming to a conclusion, then it all starts up again and the drunken lurching starts to become a little tiresome. A bingo game (on DNA) feels a bit pointless  – and let’s be honest, there have been enough bingo games and gameshow motifs in contemporary theatre to last us all a lifetime. We are introduced to the marvellously debauched and feisty great-grandmother Julia via a screen interview with an expert on the Tasmanian penal colonies – but having met Julia, I wanted more of her.

So not a perfect show – it feels like it could take a few cuts and tweaks. All in all, though, a great example of how circus skills can be employed in the dramaturgy of a theatre/cabaret show to great effect.

The 7 Fingers: Reversible was seen at Assembly Rooms on 11 August 2018.

All shows are presented as full runs at the Edinburgh Festival Fringe, 3–26 August 2018. See www.edfringe.com for full details or to book tickets.