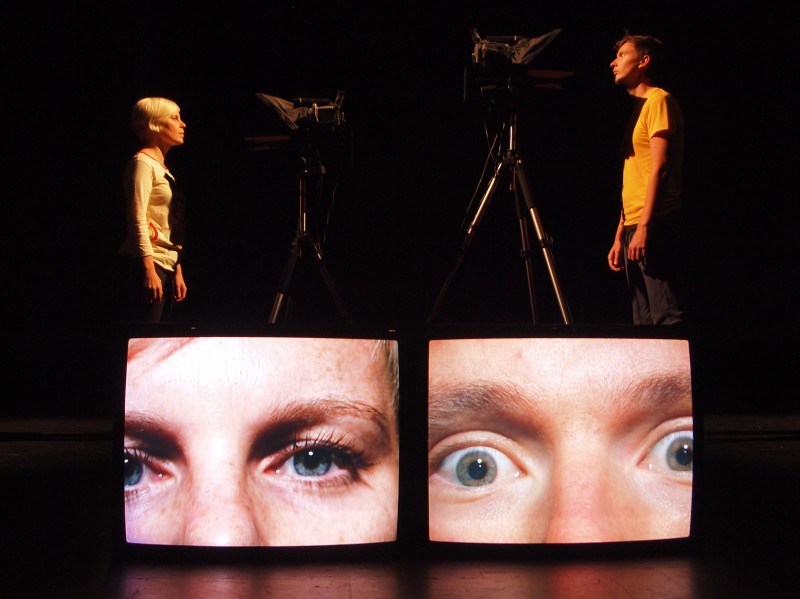 Slap Talk is a six-hour sparring match: a constantly changing stream of aggression and one-upmanship, quiet digs and impressive bravado. At its centre is a game; a challenge to follow the rules, to keep going, to throw these words back and forth without break, without breaking.

Gemma Paintin and James Stenhouse, the two artists who make up Bristol-based live art duo Action Hero, stand and sit opposite each other, divided by the cameras that show their faces on two cube-like screens at the front, and the autocue, which delivers their script. It’s a thoughtfully constructed set up.  I try to follow the text: autocue to Action Hero, Action Hero to camera, camera to screen, screen to audience.  The idea of the audience as ‘collaborators’ is central to the company’s ethos and here, though they throw their insults at one another, we experience how it feels to receive them directed at us, albeit one step removed by the archaic screens.

Starting with fight preamble which feels like there might actually be a fight, Slap Talk moves through its arenas of play with the audience barely noticing its shifts. One moment I am expecting a boxing match only to realise that I am now witnessing a declaration of war. A lovers’ argument. A shopping channel. And I think for the first time about how similar these are. About the obvious or underlying aggression of these words and our use of them in daily life.

Sometimes they are explicit: ‘I’m gonna fuck you up,’ ‘I’m gonna set you on fire,’ ‘I’m gonna kill you and feed you to dogs.’ Sometimes they are subtler: a patronising appraisal of someone’s lack of material wealth was the one that hit me hardest, ‘You’re lucky, really, having nothing. I’d swap places with you in a flash, if I could. You know, metaphorically.’ I haven’t been in a fight since primary school but this one-upmanship I understand, I’ve seen, I’ve had directed at me and I wanted to stop them and say, ‘You can’t say that – it’s too close to home.’  There is something here for everyone to identify with.

We hear language that only comes out in anger – that stupid, useless language of trying to find words – and it feels comical yet real. We hear the tender rough language of lovers; I remember ‘I’m gonna break your heart’ thrown into the melee of other physical things we can break in other people, and I soften for a moment before the diatribe continues. Action Hero never let us wallow in one thing for too long, never satisfy our want to hold onto these moments.

The fact that Slap Talk keeps going, keeps rolling, is what makes the piece remarkable. It peaks and troughs, brutal and subtle. It morphs, changing drastically yet never climaxing, never looking different. It invites us to watch this sparring side by side, to consider each as the same thing.

The writing is great and sharp and is peppered with one-liners that I try furiously to retain. I have scrawled on the back of my ticket ‘This is horsepower and it’s cantering.’ My programme is marked with ‘four in one bluetooth bird hotel’ – the shopping channel advert that tipped me over the edge into hopeless giggling.

It’s poetic and playful and tough and unsentimental, this game we’re party to, and I can’t leave. I have to pull myself away to do the other things I’d planned within these six hours. I miss an appointment; I watch almost half of the show throughout the afternoon. This doesn’t feel durational, or at least, not for the sake of it. It’s structured and considered: perhaps it is just a show that is six hours long. In contrast to many one hour shows I’ve seen, I’d be reluctant to give back any of those I spent in the Arnolfini auditorium watching Slap Talk.