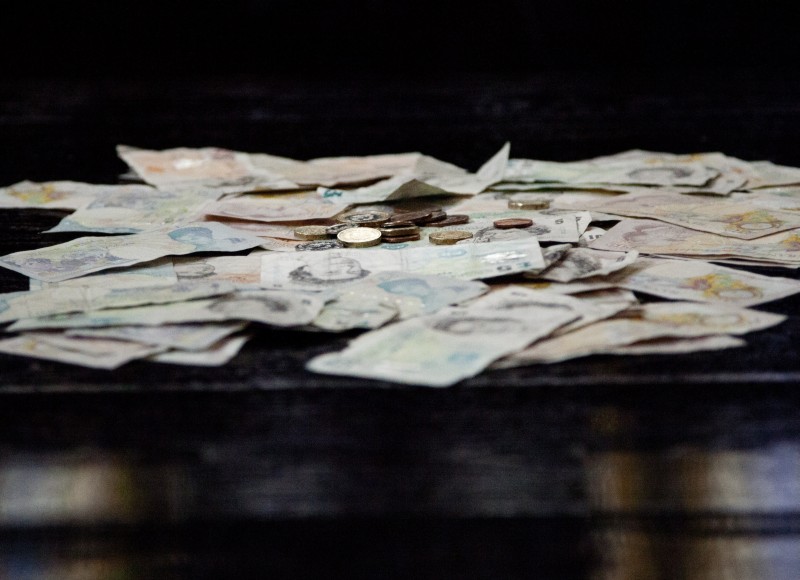 The concept of The Money is simple. Very, very simple. Absurdly, gloriously, deliciously, terrifyingly simple. Some of the things it did to my head were more complicated.

This is how it works: a representative from Exeter-based Kaleider – a company who ‘produce and promote live experiences’ – places The Money on the table. The Money comes from the ten benefactors, who sit around the table, and from benefactors at previous shows. They have two hours to decide what to spend it on, watched by twenty-odd Silent Witnesses, who can only observe, unless they pay in £10 to join the conversation. If a consensus can be reached by the end of the two hours, the money can be spent. No agreement? It rolls over to the next show.

The conversation begins. One woman, full of earnest nods, wants the money to be spent on benefitting one person: a deprived child, perhaps. Someone else suggests putting the money back into Mayfest, commissioning a new public art piece from a young artist, and this idea seems to have some mileage for a while. There is the do-gooder, the make people smile-r; let’s put money in envelopes with cute messages and put them through people’s doors. There’s the obvious ‘give it to charity’ camp, but which one? And there is the occasional voice from the corner that suggests spending it all on pizza, which we all giggle at, and dismiss it as a joke, though even early on this break from altruism is a relief.

One hour in and I’m squirming in my silent witness seat; hand firmly shoved in mouth in an attempt to keep quiet. I leave the room and walk around M-Shed for ten minutes because I just can’t take it. I return. It’s painfully circular and I’m not good at not being involved in a conversation. I feel myself age. I am cripplingly frustrated and mind-numbingly bored. I hate everyone. I hate everything. I wonder why no one has suggested burning the money yet. I wonder if they will accept me as a human sacrifice to go with it if they do.

I feel guilty for being bored of altruism. I feel guilty for having no particular desire to commission a public artwork that will ‘make people smile’. But I am at a piece of theatre and I want to be engaged, entertained. And then, slowly, it dawns on me. Kaleider aren’t going to do anything just because it’s boring. They provide the concept, the ceremony – bells and gongs and the rulebook. They will oversee, but that’s it. We have to make the show. This is the deal. If I’m bored, I can change it. It will only cost me a tenner to stop being bored, and I will be able take my hand out of my mouth, which seems like a good idea by this point as I am starting to drool. I am reaching for my purse. Pulling out a note. And walking forward to ring the bell that makes me a benefactor. £793 cash, and a chance to change things.

I suggest we do something flippant. Daft. Fun. When does anyone ever put you in charge of £800 and tell you you don’t have to be noble? Surely this is what is exciting about this set-up: that we don’t care about the money. Really. Really, I’ll have forgotten about my tiny stake by tomorrow, and be remembering the experience instead, hopefully. I join in because I want to remember the experience.

Somehow – I’m not quite sure exactly how – I manage to talk the group around. I’m sure fatigue had something to do with it, or relief at a change of track, or the fact that (not very) deep down we’re all a bit selfish, and a bit skint, and at twenty minutes before the deadline we are all writing our names on small bits of paper ripped out of the back of a notebook and putting them into a hat. Whoever’s name is drawn out will get The Money. All of it. No strings attached.

It’s thrilling, and feels BAD and GOOD at the same time. And I am having so much fun. Fuck you charity! Fuck you art! Let’s spend it all down the pub! Let’s throw it in the harbour! Anything could happen. It’s a fantastic rush. What’s happened to me?

The Bristol rumour mill works fast, and inaccurately. By midday the next day I have received three texts from people who had heard that I was now £800 richer. I would like to take this opportunity to let you all know that I am not. That my name wasn’t pulled out of the hat, that someone else’s was and what she will do with the money – I don’t know. I also don’t care. I think she might do something nice; she was very nice. She also didn’t want it. She seemed bothered to be leaving with it, worried about the responsibility that comes with that. But if the money is strings-free – if we give and take and barter flippantly – does a responsibility still exist?

The Money takes a big risk. It is perhaps the best and worst thing I have been to at Mayfest. By Kaleider refusing to intervene, there is a huge risk that it will not work. That it will be boring. They leave us to think, to be corrupted and negotiate that, to make the decision. It’s very brave, but even if there are interesting debates, two hours risks being too long for a silent witness to be out with that conversation. I was not, when bored, curious enough to stay to see what the money would be spent on. The fact that I don’t, as an audience member, care that much about the money is both what makes the show exciting, and is its potential weakness.

Eventually, I couldn’t help myself. I wonder how much this piece relies on provocateurs: I don’t often put myself forward as one in participatory shows. I wonder if it sometimes totally doesn’t work, or if it’s a fool-proof formula. I’d certainly be intrigued to go again.

This is a clever, thought provoking experience unlike any I’ve witnessed before. Money is corrupting and to use it flippantly is thrilling and unusual. The Money forces us to face up to ourselves in a very real way, in a very public way. I left with the knowledge that I’d been an instrumental part of ensuring that, probably, an artist didn’t get a commission / a child wasn’t bought an instrument / no one received money through their letter box. That feels like far more responsibility than winning £800 would have done.