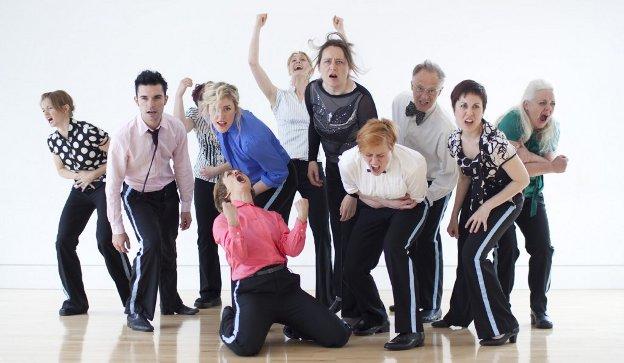 A three-way reflection on h2dance’s Say Something

Say Something, a production by contemporary dance company h2dance, takes a close look at the nature of freedom of expression through dance and music. Ushered into the performance you walk into an intimidatingly empty and open room. No seats mean that the audience meander around the centre of the space, not knowing where to stand or even focus attention. ‘Testing, one, two,’ rings out from microphones placed around the edges of the room, while a stage at one end of the space draws the audience in as artists calmly set up their equipment and instruments. A nervous tension builds in the room as the audience set down bags and stand, waiting.

The performance that then begins blurs the lines between performers, participants and audience. From the beginning you are unsure of who is who, looking suspiciously for the most confident people around you, waiting for them to burst out of the crowd. A person grabs a roaming mic and welcomes everyone, and here the rules of the performance are first laid out. The audience can do or say anything they like at any time. The microphones have been left out especially so that the audience can use them to speak out and react to the performance.

When the performance begins in earnest the performers emerge from amongst the audience, weaving between them, with the movement built around a choral soundscape by composer Sylvia Hallett. It starts very simply, like a vocal warm-up, building into intricate harmonies. Using both the dancers and a group of volunteer participants, the choral compositions are beautiful and act as a way not only to give the production a cohesive style and mood but to give the audience a mechanism for easy participation: it’s hard to resist joining in with these choral melodies.

The multi-level participation is brilliantly handled; by involving the audience and integrating the participants fully, Say Something opens up the possibilities of what a performance can become if the audience give it as much direction as do the performers. Verging on a social experiment – and with different outcomes to each show as each audience responds differently to every performance – Say Something can be a challenge to the audience or a desperate appeal for substance and depth in a fickle and unquestioning world. It’s easier to be a follower all the time than to disrupt and risk changing things. ‘Say something’ becomes a question or challenge to the audience throughout the performance. If you don’t speak up when you are asked to do so can you speak up when you really need to? A unique experience in itself, the point of the performance is what it leaves you with: the question of what it means to be free to speak up and say – something.

I rush into the Dissecting Room with just fifteen minutes to go before ‘doors’. I’ve been to see another show at Summerhall that has just ended, so I’m late. I arrive into controlled chaos: Square Peg (the company whose circus show Rimeshares our space) are clambering over their rig, pulling down ropes. Say Something’s composer Sylvia is tuning her electric guitar. Dancers are limbering up on the concrete floor. Ouch. I’ve missed the voice warm-up so Sylvia suggests I go off into a corner and warm up myself. Choreographer Heidi rushes over to tell me that a few crucial changes have been made to the show – no time to rehearse me in, I’ll be fine. It’ll be all right on the night. Soundman Max is trying to sort out some problems with the mics due to their having been used for a club night held in this space yesterday. Yep, usual Fringe stuff, even at forward-thinking venues like Summerhall. It’s 7pm, the sound problems aren’t solved, but the show must go on.

We, the company performers and volunteer extra ‘secret performers’, join the line outside and enter with the audience. We all mooch around the room, or lean against the walls, watching the sun streaming in the windows. Everyone’s clocking everyone else. Jasmin takes the mic and does the intro, explaining that the audience are free to do as they will over the next hour, pointing out the mics that can be used for comment or commentary. On a set cue, we start to hum, a kind of secret hum. The sound builds and one by one we step out from the crowd, weave through the audience and walk across the room, to become a choir. At the moment we are all gathered, we turn and face the audience, bend over, rise, take a loud deep breath, and burst into song – it’s a gorgeous moment.

We are in four voice groups – soprano, alto, tenor, bass – and each group has a leader. The piece plays with flocking and grouping within the space, weaving in and around the audience. We sing, we walk, we sing, we run, we sing, we crawl, we sing, we roll… On some cues we follow our group leader; at other points we have a sequence of sound and movement motifs that we use to make our own patterns through the space. At given points we move the audience into different shapes and groupings. We circle them, bathe them in sound showers, hug them, gently herd them round the space. Later in the piece, things turn nasty and we screech and squawk and march and form military lines that drive the audience across the room and kettle them in corners.

There is an intention in the piece to investigate conformity and individuality. One performer, Anne Gaelle, emerges as the non-conformist of our group, and there is sometimes a similar rebel or two in the audience group. The piece shifts in mood and our relationship to the audience shifts accordingly. On this particular night, the audience is a respectable number of people, but not massive, and it’s a pretty young and relatively shy crowd – they seem remarkably easy to sculpt! Some nights earlier in the run have been rather more feisty. We’ve had plenty of rebels and refuseniks – less so tonight.

Despite the changes in choreography and the fact that there are choir members in the piece that I haven’t yet met (adding another interesting layer to the ‘who’s who’ start to the piece!), I take strength from the fact that the performer/audience ration is higher tonight than on last week’s shows, and I particularly enjoy this performance. The choir feels strong and united tonight.

Taking part in Say Something was sold to me as a fun and relaxing thing to do at the Fringe, singing with a community choir. As it turned out, it was fun, but hardly relaxing – running round to meet rehearsal and show commitments in between reviewing – and something of a busman’s holiday as I’d given up paid work with my own company (Ragroof Theatre) in order to give myself exclusively to Total Theatre for the month of August! Nevertheless, it was a great experience – and lovely to see how other people making ‘immersive theatre’ handle the challenges!

Dorothy Max Prior, volunteer performer and choir member, Say Something

As Say Something works with volunteer community singers alongside professional dancers, the last half hour before the show is always very stressful. The constellation of singers is constantly changing, meaning certain sections need to be repositioned and rehearsed in a very short amount of time. Adding to that stress the show tonight started slightly late due to technical problems. We didn’t want the audience to wait around for too long so we decided to go ahead with the show and sort out the problems during the performance. This luckily worked out and added a nice touch to the introduction.

The audience, consisting of mostly young people, entered the hall with slight hesitation, not quite knowing where to place themselves, working out whether to stand in the middle or hover round the edges of the space. When the performers started to reveal themselves nervousness developed amongst the audience as they became aware of their role within this show. Quite quickly the group merged, responding as expected of them, mostly obedient to the instructions given.

When performing the work we are constantly trying to guess the audience and predict their reactions. One woman decided to participate, dancing with us almost from the start. The confusion and individual reaction amongst the audience wondering ‘is she one of us or one of them?’ is interesting to observe. In most shows the audience members distance themselves from anyone who stands out as different and doesn’t conform to the unspoken rules that are quickly established in the space. Even though everyone has been encouraged to take part and express themselves freely during the show this opportunity is used by few.

The audience seemed joyfully uneasy about the work as sounds were thrown at them from different directions. ‘What do you want to tell me,’ one man asked while we were shaking the audiences hands and giving out hugs. ‘I really wanted to join in, but I feel too shy,’ was the response of a woman during the interview section. Another woman said as she giggled away in a nervous manner: ‘I just want to laugh’. When the show progressed into the middle sections, what we call the ‘rock song’, the majority of the audience seemed at ease and exited about joining in the dancing and singing along. There is however always someone on the outside of the group and I’m always wondering if they like that role, are bored, or if they just want to watch Anne Gaelle who reveals the truth that she works for h2dance.

Overall there was a good amount of interaction with the audience during this show. As the performers gave instructions and manipulated the audience mostly with success, all the planned elements of the performance came together. From our perspective this makes for a successful show. Possibly confused, hopefully touched, and with a range of thoughts on their minds, people seemed jolly as they left the hall.

Heidi Rustgaard, choreographer for Say Something and co-artistic director of h2dance

h2 dance‘s Say Something is performed 7-26 August 2012 at Summerhall as part of Edinburgh Fringe and under the Escalator East to Edinburgh banner. The performance written about here took place 15 August 2012.