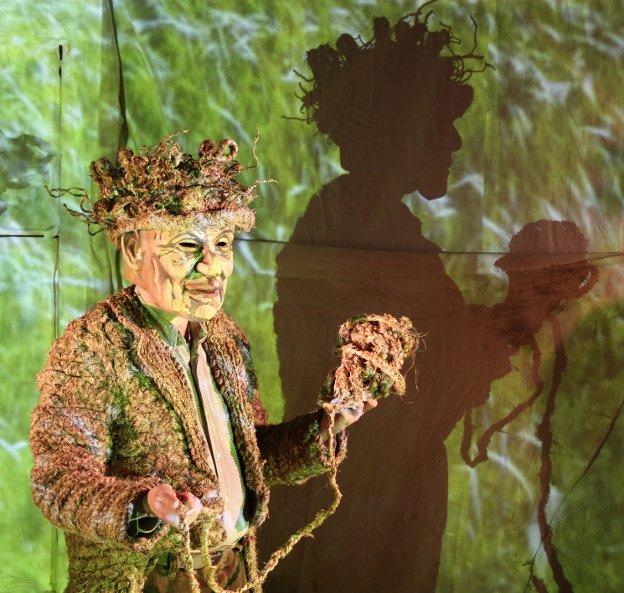 If you do go and see this show, I strongly advise that you read the programme notes beforehand. What you will discover is that it is based on the life of Angus McPhee, a native of the Scottish island of South Uist who developed schizophrenia during his army service in the Second World War and was institutionalised for many years. During this time he developed the habit of weaving grass into a variety of forms, a practice introduced to him during his childhood. In retrospect I do see how these plot points were incorporated into the show, but at the time I admit to being mightily confused.

The production certainly creates some striking visual imagery, achieved through a combination of puppetry, mask and video projection, much of which seems inspired by the early schools of modernist art. The set is comprised of multiple, angular, off-white flats and has a definite Cubist / Expressionist feel. The flats are moved around to accommodate a variety of scenes and provide the screens for the projections. One section was a pure surrealist collage of floating objects, animated projections and discordant noise – what I now assume was a representation of McPhee’s mental illness. His apparent escape from the harsh reality of institutionalised life was then set against some intensely coloured expressionist / fauvist images.

The Scottish elements that thread through the show exist in strange counterpoint to these languages. The show is narrated mostly in Gaelic by perhaps the most engaging performer, who also accompanies the action with some beautifully delivered traditional songs. The actual examples of woven grass garments are also truly splendid, if surely very itchy. Whilst some spectators clearly hugely appreciated the show, a few even rising to their feet in ovation, my general impression is that this production would benefit from some further development. Too much of the choreography / blocking seems ill-defined and repetitive, and the storytelling fails to set intriguing questions that keep us engaged. The puppetry sections were an exception, and were delivered with real skill, charm and ingenuity. There is a wonderful life-sized boy figure, the sudden thrilling appearance of some braying horses heads, clucking chickens and miniature houses, but even these scenes often felt confusing in relation to the storyline.