Brazilian clown and film director Mariana Gabriel’s heartwarming and inspiring documentary, Mi Abuela era Payaso (created with Ana Minheira), contains much food for thought – not least, the statement from a key interviewee that much of the documented history of circus is White, male and European. So to redress the balance a little, enter Mariana with a portrait of her grandmother Maria Eliza – a Black Afro-Brazilian woman who was born in 1909 into a circus family, and went on to become Brazil’s first woman clown of renown.

It is hard to translate the title of the film into English. Literally, My Grandmother was a Clown – but the point is the use of the masculine form, payaso (in Spanish, or palhaço in the original Portuguese), not the feminine form payasa – Mariana’s grandmother was a gentleman clown, called Xamego. In the early twentieth century, being a Black female circus performer was enough of a bucking of trends without also trying to persuade the world that women could be clowns. Maria Eliza thus hid her femininity behind her male clown. As a teenager, she formed a singing duet with her sister, starring on the radio shows of the day. We see Mariana in the documentary listening intently to a retro radio set playing one of her grandmother’s favourite songs. Maria Eliza then went on to develop her clown persona, who is (inevitably) a musical clown – the name Xamego means caress or rhythm. Cue close-up on the keys of the accordion. 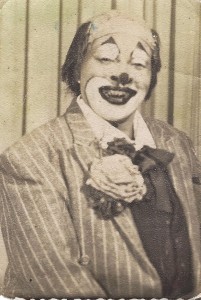 The story unfolds through old photographs, playbills and first-person reminiscence, including some wonderful interview material with Mariana’s mother/Maria Eliza’s daughter, Daise – herself a renowned acrobat and hair-hanger. This is juxtaposed with footage of contemporary circus acts that retain the aesthetic and metaphor of traditional circus – clowns, jugglers, and aerialists showing us that the show must and will go on. We see big tents, and tiny model tents. We hear music boxes and grand fanfares. Roll up! Roll up!

The filmmaker places herself firmly within the story: we see her in her own clown persona, all made up and ready to perform. We see her talking to her mother, her uncles, and her cousins – delving into the family history, and sharing stories. Most movingly, we see the only small fragments of film documentation that exist of Maria Eliza herself, gorgeous 8mm footage of a tiny old lady dancing with her granddaughter and gurning to the camera: once a clown, always a clown… There is also a lovely short film of Mariana’s mother very evidently pregnant, her father and grandmother goofing up the scene with pillows and footballs.

The glimpses of Maria Eliza are fleeting. We build our picture of her mostly through talking head reminiscence and anecdote, not only from family members but also from her contemporaries: the circus artists, producers and other professionals of the twentieth century who knew and worked the traditional circuses. And, my oh my, how poignant it is to hear these voices and see these faces, as inevitably they won’t be around for very much longer, and their stories, alongside Maria Eliza’s, are crucial to the history of circus.

Xamego paved the way for the strong army of Brazilian women clowns that followed in her wake, including (amongst many others) the women of the acclaimed LUME Teatro company, Silvia Leblon, and Angela de Castro who has been resident in the UK for many years, and whose How to be a Stupid workshop is an annual highlight of the London International Mime Festival.

Following the film showing (seen in Guadalajara, Mexico, as part of FiCHO Festival 2017), Mariana is here in  person to present a short clown numero – a duet between her clown persona Birota and her grandmother.

Birota enters from a little red velvet sideshow-tent that sits centre-stage. With her is a music stand with tiny red curtains that open to reveal a photo of Xamego. She goes on to sing the song that her grandmother always sang to and with her: ‘Canta y no llores’ – otherwise known as the ay ay ay ay song. And of course, we all join in. Not a dry eye in the house… 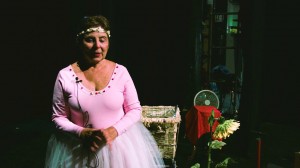 The next day, in the same space (the theatre of the Alliance Française, which is one of the key venues for FiCHo Festival), we get to meet another great South American clown, Lily Curcio from Argentina, whose company Seres de Luz are presenting Travesias. This is a solo clown-theatre show, although created in collaboration with Mexican director Aziz Gual, and enacted with the technical help of Lily’s Brazilian associate Daniel Salvi, who does the offstage work; and Eduardo Brasil who created the technical marvel that is the dancing sunflower, the other ‘character’ in the show, who shares the stage with Lily’s clown persona, Jasmin.

We first see Jasmin pulling a cart onto the stage – the sort of cart that ice creams or drinks are sold from at Carnival time or at festivals. After much playful interaction with the rope, the cart is finally in place. A little backdrop is pulled down, and up pops the sunflower. The wind howls, and we understand that we are in a desert. A storm threatens, but the rain never comes. Our little dancing sunflower is thirsty. Cue an elaborate section in which dear Jasmin tries her best to get a bottle of water open using an ever-increasing number of trick hammers, and finally a detonator. Which fails, naturally. But never mind, plenty of audience members have water with them…

The scene switches; two little tables draped with red cloth are brought on, along with a violin case. There’s an amusing musical interlude with a twist as the (miniature) violin turns out to be something other than it purports to be. Away with the tables, and out comes Jasmin dressed for a ballet performance, in a magnificently ludicrous pink leotard and tutu. The following scene shows Lily’s clown skills to best advantage as the grace and elegance of the dance inevitably disintegrates. In some ways, these two scenes feel a little out of place with the world created at the beginning of the show – we have jumped from outdoors, in a desert, watching the race for survival of the world’s last ever flower, to indoor vaudeville parlour or stage scenes – but Lily’s presence carries it all off magnificently. It is a pleasure to witness her at work, even with reservations about the dramaturgical logic of Travesias. Jasmin is an endearing clown – and she wins the heart of the audience. 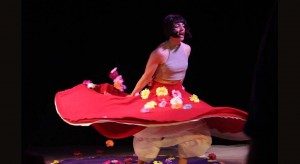 Not exactly a clown, but certainly someone adept at clowning, is Dulce Duca from Portugal. She is, in essence, a juggler – but that label does little to explain Dulce’s show, Un Bello Dio. It is a whimsical, lyrical and totally endearing piece which creates a series of beautiful stage pictures, through the manipulation of a variety of objects: she uses not only her juggling clubs but also an ever-evolving combination of whirling circular skirts that transform themselves into capes, cloaks and spiralling umbrellas; colourful flowers which are plucked from the skirts and toyed with; and a great mountain of snowy white net that lifts and falls on pulleys or at the whim of Dulce’s girating body, transforming itself into mountain, Moomin, bridal dress, veil and more – the images and associations pour out continuously, morphing with each shift in scenography. At times, the multi-layered and multi-coloured skirts look folkloric; at other times, like a living rendition of a Bauhaus costume-sculpture by Oskar Schlemmer.

As Dulce whirls around and around the stage, flowers flying in every direction, she is at once a dancing diva, a dervish, and a playful child delighted with the world she finds herself in. A sense of wonder and discovery pervades the piece, and some particularly strong moments come when she invites an audience member to join her on stage. She picks the perfect partner (a middle-aged gentleman in a suit, whose choice is greeted by delighted cries of ‘papa! papa!’ from the front row), and she treats him with care – flirting gently, waltzing with him, and enveloping him in the bridal tulle. Un Bello Dio is a total delight – a very interesting feminine take on what is too often the masculine world of juggling and object manipulation. 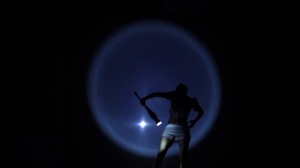 Also female, also a juggler who clowns, is Paola Avilés of Mexico. She is a renowned cabaret artist, circus mover and shaker, and swing dancer who runs a performance space in Mexico City called Cracovia 32. Her show Ballhaus is an interesting mix of object manipulation, clowning, eccentric dance, shadow theatre and film. In other words, there is a lot going on! We first see Paola dressed in a vintage-style jumpsuit with a 1940s hair turban arriving with an old-fashioned brown leather suitcase. On comes a trolley, up goes a poster proclaiming the name Lola. Who is Lola, what is she?

On screen, we see 1920s flappers, 1930s Lindy-hoppers, and scenes from Berlin in the 1940s. On the soundtrack, Louis and Ellie sing Summertime, Della Rees belts out Whatever Lola Wants, and Marlene Dietrich is Falling in Love Again. Like Bob Fosse’s film Cabaret, there seems to be some intention to draw parallels between the carefree live-for-today world of burlesque and vaudeville, and the painful realities of a world torn apart by war… Although the piece only touches on this, and it is not 100% clear (to this writer, anyway) what the artistic intentions are, beyond the stated aim to juxtapose fantasy and reality. Moments like World War Two (i.e. circa 1940) air raid sirens blasting over 1920s nightclub footage added to my confusion. I also found the silent film subtitles impossible to read, even from the second row, so there may have been elucidations there that I missed.

But although, overall, there is an unresolved question about how all the elements of the piece slot together, and why, the individual scenes are delightful. Footage of Josephine Baker’s famous dance with her shadow self provides a link into some very lovely live shadow work by Paola, who stands behind the screen with an illuminated juggling club, the shafts of light crossing the gently undulating shadow body most beautifully.

Clubs, balls, wine bottles, a rubber chicken and a whole lot more are manipulated expertly – often whilst Paola dances. There is a full-on Charleston with glowing balls, and a particularly nice ‘drunken showgirl’ number with the bottle, our head-dressed and sequinned Lola staggering and swaggering tipsily around the stage as she juggles with experienced ease.

So nothing but praise for the clowning and juggling talents of Paola Alvilés – this show is a beautiful catalogue of brilliant cabaret numeros – but some reservations about the unity of the show as a whole.

Viewing this selection of work together, over a few days, at FiCHo Festival, it is clear that there is a great deal of wonderful female clown talent on both sides of the Atlantic Ocean. Congratulations to the festival for bucking the trend and programming so many magnificent female performers: alongside the four profiled here, the festival also presents LUME Teatro’s Ana Cristina Colla with Ser Estando Mujeres (Brazil); and the all-woman contemporary circus company Naga Collective (an international mix based in Belgium, whose work Persona is reviewed here).

What a joy to encounter them all here. Bravo, FiCho – and bravo women clowns of the world!

All shows seen in FiCHo Festival, which takes place in Guadalajara and other cities in the state of Jalisco, Mexico, November 2017.

See www.fichofest.com for the full programme of shows, events, talks and interventions.