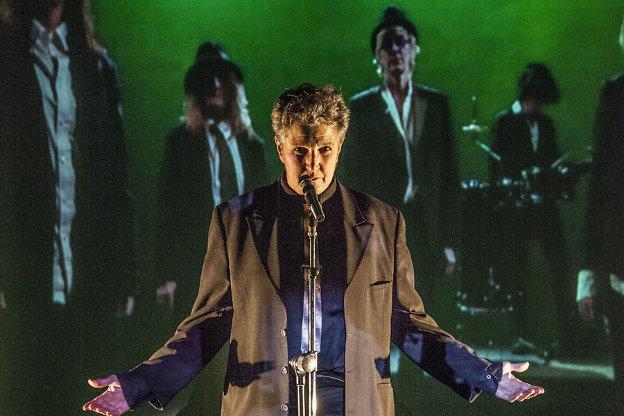 ‘Could this piece be performed by anyone else?’ asks someone at the post-show discussion that follows the presentation of Ruff, the latest solo performance by the legendary Peggy Shaw, co-written and directed by her Split Britches partner, Lois Weaver, and seen at Chelsea Theatre as part of their ongoing Sacred season.

Peggy and Lois like the question and muse on it awhile. ‘That might be interesting,’ they say, and no conclusions are drawn. But it is obvious from the audience’s response that the majority view is no, no one else would do – this is Peggy’s story, and her presence in the telling of it is crucial.

Ruff is the latest in a series of works – earlier Peggy Shaw shows presented in the UK include You’re Just Like My Father, Engendered Species, Menopausal Gentleman, and MUST (a collaboration with Clod Ensemble) – that blend autobiography with observation and reflection on the wider world, starting with the self and spiralling out to encompass all of us in the room, and everything beyond. Ruff is in many ways a continuation of recent work. It takes off from where Menopausal Gentleman left off in its insightful and playful exploration of popular culture icons and tropes that define the gender-play of ‘becoming a man’. With a sideways step, it also follows on neatly fromMUST in its intense investigation of the workings of the body, and the relationship between inside and outside, personal and universal, art and science. Both previous shows also, like Ruff, pivot around an ironically humorous acknowledgement of the ageing process and the awareness of mortality.

The twist in the tale is that Peggy Shaw had a stroke in January 2011. The stroke was in her PONS, which rhymes with the Fonz, as she points out in the show – the Fonz, along with Marlon Brando and Frank Sinatra, being one of her many male role models as she grew from girl-in-a-green-dress to iconic butch woman performer with three legendary companies (Hot Peaches, Spiderwoman Theatre, and Split Britches) and concurrently as a solo performer / collaborator with many other theatre-makers in the USA, the UK and beyond. We learn that since having the stroke she’s realised that she has never really performed solo. She has always had a host of lounge singers, movie stars, rock and roll bands, and eccentric family members living inside her. Ruff is thus ‘a tribute to those who have kept her company these 68 years, a lament for the absence of those who disappeared into the dark holes left behind by the stroke and a celebration that her brain is able to fill the blank green screens with new insights’.

I’ll admit to some moments of trepidation before the show. She’s one of my favourite performers, someone whose work I’ve loved since first meeting her when the Hot Peaches troupe brought their wild multi-gendered post-Stonewall extravaganzas to the ICA theatre in London in the mid-1970s – and like an anxious relative coming into the hospital after hearing the bad news, I walked into the theatre wondering what I might find of ‘my’ Peggy, fearing she’d be a shadow of her former self. And if she were, that would be OK, I tell myself…

But she’s not. She’s no shadow, she’s fully there, present. She’s alive, she’s alive – do not doubt that she’s alive. She’s as strong and as powerful and as entertaining as ever, a stage presence to be reckoned with. She’s different, yes, to her old self (or selves  – one of themes of the show is that we are always many people wrapped up in one body) but the differences are placed upfront, are handed up to us to view and reflect upon.

Screens play a big part in the show. The use of a number of monitors turned now towards her, now towards us, are both a practical device to prompt her memory (should that prompt be needed), and a way of exploring memory, repetition, mediating and ‘monitoring’. Sometimes they run the text of the show and sometimes they run footage of brightly coloured fish swimming round and round (fish whose memories are so short that they don’t feel trapped in a tank?). A large rear-stage screen portrays that internal rock and roll band, externalised larger than life: pounding drums, screeching guitars – and accordions. At another point, the screen gives us a shaky and blurred image of a young woman in a green dress walking towards the film camera – a woman that Peggy knows is ‘her’, yet is clearly someone else from a far-off time and place. Again and again in the show we come back to the same question, reflected in many different ways and finally stated directly: ‘Am I the one you know?’

It’s interesting (as my companion points out) that it’s the words that need the prompts – the physical action on the stage, the scenographic relationship of body to space, needs no prompting other than one brief moment when Lois calls a direction from the back of the auditorium. Again, there is no subterfuge, or trickery, or embarrassment – the possibility that this might happen is built into the show. These safety nets are there, upfront and clearly present, for us to see and accept, but in fact they are not too often needed. A few links and transitions need some double-checks, but each monologue or song sees her getting into her stride and enchanting the audience in the way that has always been her special gift.

She has this odd and wonderful kind of rapping/lip-synching to popular tunes thing she does in her shows – here taken into very odd and interesting territory. There is, for example, a very funny take on Shirley Ellis’ 1964 pop hit The Name Game (I’m old enough to have sung it in the playground: ‘Shirley, Shirley bo birley, banana-fanna fo-firley, fee fie mo mirley – Shirley!’) which comically explores the post-stroke problem with remembering names, using audience members’ names for the game. Later, we get a satirical take on the Hokey Cokey (‘put your left arm in, take your whole face out…’); a clever identity-switching rework of Jacques Brel’s paean to bohemian male bravado, Jacky’s Song; and an oddball appropriation of Leonard Cohen’s I’m Your Man, with Peggy’s voice layered over footage of Cohen in concert: ‘If you want a boxer I will step into the ring for you. And if you want a doctor, I’ll examine every inch of you.’

Aha, so here we are – back to the doctors, and back to the stroke. The show is called Ruff – a piece of costume, something that externally marks the internal meeting of neck and head – and Peggy tells us that she is dizzy from ‘the same neck holding the same head holding the same brain’ for all these 68 years, the old brain and the young brain ‘thrashing it out’. She says she sees lights, and we see lights twinkling in her hands. She coughs and needs water, and retrieves the bottle she asked someone to hold at the beginning of the show. Constantly the audience are drawn into the show with small moments of direct contact. She tells us that she has drunk too much coffee in her life. Maybe that’s why she had a stroke. She hears clocks ticking all the time; the clocks are everywhere, she can’t escape them.  She can’t sleep for worrying about remembering to get up to make a ham sandwich for her small grandson’s lunchbox.

None of this is acting. This is for real (although ‘real’ does not mean there is no need for performance – playing yourself is probably the hardest job of all). Which brings us back to our opening question: could anyone else take Peggy’s place on stage?

If they did, it would be something other than this show, something very different. I was interested to note that the Time Out listing placed the show under Cabaret rather Theatre. Hardly your usual Cabaret material – but on reflection, there’s a kind of logic. In Cabaret – as in Clown – there is a parallel to Performance in that it is an extension or version of the self that is being portrayed. You could argue that an actor has nothing to mould his character from other than his or her self, but there is something intrinsically different about an actor playing a character (real or fictional), created through a process of observation and mimesis, and an artist who performs the self – or some aspect of the self. It’s perhaps about transparency, about there being no attempt to submerge the self in something ‘other’. In acting, the self and other merge to become one; in performing, the skills of the actor are used without the taking on of an ‘other’.

Whether we give the word ‘actor’ to the creator of this process, or whether we instead use the preferred (in Live Art circles, anyway) word ‘performer’, we’ll here acknowledge the great body of solo work in which the self performing is indivisible from the self who created the content of the work. The best examples of this autobiography – this writing of the self – are, like Peggy’s work, not autobiographical in a self-indulgent navel-gazing way, they instead use the self as the springboard to explore the world of which they are part, finding the personal in the universal and the universal in the personal. Peggy shares this heritage with a host of esteemed performers of her generation who use (or ‘used’ in the case of those who have left this world) the self as their raw material: a list that includes Holly Hughes, Penny Arcade, Carolee Schneemann, Laurie Anderson, Karen Finlay, and Spalding Gray – amongst others.

And sometimes, a personal story just has to be told by that person. The body, mind, soul and sacred essence combined to make up that person is the only possible storyteller – and Ruff is a case in hand. At one point in the show, our storyteller asks, ‘Do I look like a Peggy?’ To which the reply might be: you don’t look like a Peggy but you certainly look like the Peggy – the one and only, the truly remarkable performer that is Peggy Shaw.

Ruff was seen by Dorothy Max Prior at Chelsea Theatre, London, on 5 April 2013. It was presented as part of the ongoing Sacred Season of Contemporary Performance. For more information on this year-round season, and for the coming shows, see the Chelsea Theatre website.

For more information on Peggy Shaw’s solo performances, and her work with Split Britches and other companies, see her website.