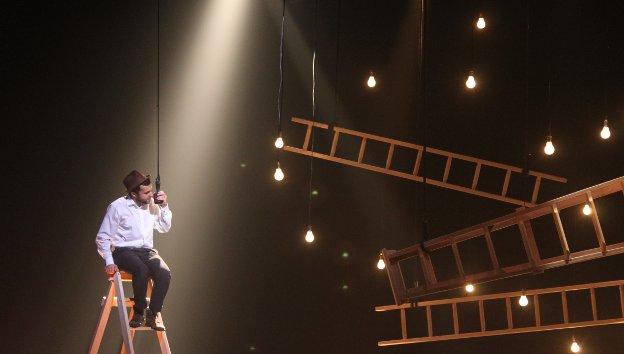 I think it’s useful to start by saying that The Raun Tree is a music performance.  Now, I’m not a fan of categorising performance into genres – you risk reducing your audience and limiting expectations. Blurring the borders between genres and mixing disciplines so often has especially vivid results – sparking new associations by creating richly layered work with harmonies and contrasts that might not otherwise be achieved. But The Raun Tree is a haunting and beautifully delivered musical performance, rather than a piece of theatre.

Set amongst an artfully arranged forest of wooden A-frame ladders and other ‘found’ objects, with sun-like warm lighting, the band rarely step from their conventional musician spots. Michael Vale’s set is strangely deliberate – more a children’s playground than a wild forest – and it cries out to be climbed, swung from, danced between, hidden amongst. The drummer and bassist, both very talented, seem to do their best to ignore the ladders, and there are only a couple of times during the performance that leads Dom Coyote and sweet-voiced Emily Barker engage with their surroundings. The constantly warm lighting state is soothing, but frustration creeps in as the latent potential of the playground set goes unexplored.

Dom himself looks like another one of those Mumford boys, although I get the immediate impression that he’s for real and he probably wears the porkpie hat a lot, maybe even because it keeps his head warm. His voice draws you into another world and his simple, leftfield lyrics keep you there. A vague story unfolds, a first-person narrative about trying to get back to the ‘summer’, journeying through unfamiliar landscapes after going the wrong way out of the emblematic, beacon-like Raun Tree. It’s an intriguing narrative, with wistful undertones of shedding childhood, of discovering that the world is stranger and more dangerous than expected – and there are ecological messages of destruction and preservation there too.

The music itself creates the landscapes of the story – cleverly layered by looping, repetitions, voices, multi-instruments – although it felt oddly one-dimensional.  Like the lighting state, it is warm and soothing, it is heartfelt. Dom sings with an unwavering passion that doesn’t allow fear or relief or uncertainty in. Perhaps it is because the metres and metres of wire attached to all the musical instruments he plays is taped to the floor, or perhaps it is the fact that his audience is already waiting for him in a dark theatre space, but Dom does not seem to have the burning desire to paint a story required to qualify as a wandering troubadour with tales of the world. The Raun Tree is a lovely idea – both the concept of the album and the central idea of teaming musical performance with theatre set – but it is hugely under-explored to the detriment of its effect. This would be surprising performed in a conventional music venue but it’s not quite enough for a theatre.