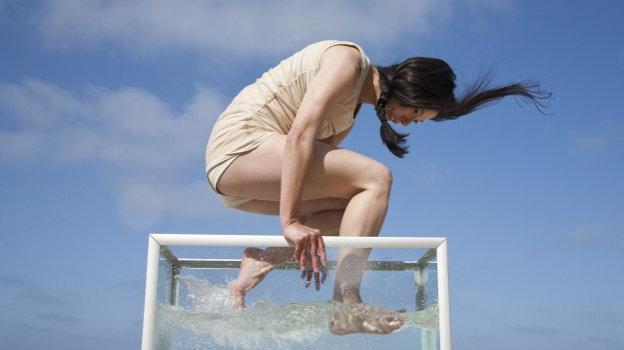 A classic circus of (seeming) incompetence, a trampolining suicide bomber, and an abstract promenade dance for waterfronts – Edward Taylor at this year’s Mintfest

Billed as their latest performance, Circus Ronaldo’s Amortale, presented at this year’s Kendal Mintfest in the company’s own tent, was not so much new as a re-working of their classic Fili show with a new beginning and some extra bits. It doesn’t matter in the least as the company are such brilliant performers, their aesthetic is agreeably rough round the edges, and the experience of being crammed into a tent with 200 other people, almost on top of the performance, is so special. The show is a classic clown set-up with the boss trying to ensure a smooth operation whilst being undermined at all times by incompetent staff and a rogue performer with misshapen Pinocchio puppets to sell.

What makes the Ronaldos unique is their ability to incorporate very high quality circus skills within a theatre show in a throwaway style that masks the discipline that is needed to actually achieve such skills.

Compagnie In Extremiste’s Extrémité is a very different prospect, but exerts a similar charm. It hardly seems possible that you could make a comedy trampoline show about a suicide bomber and get the audience on your side as you attempt to blow yourself up, but Compagnie in Extremiste managed it with distinction. I don’t think I’ve ever seen a show quite like it before.

A technician checks the set (a large trampoline next to a sandy coloured shack and in front of a tall flat wall covered in wanted posters) in a classically French shoulder-shrugging manner. When it’s all to his half-arsed satisfaction he leaves and a man dressed in a black djellaba appears. His face is on the wanted posters and he spends time getting rid of them, using the trampoline to help him get to the highest ones on the wall behind. Once this is done he sets about trying to blow himself up (and by implication the audience as well) with a stick of dynamite and a big red cartoon-style bomb.

Although not signposted as such this sequence is classic clowning with a variety of objects conspiring to make the job difficult for him. Lighters are borrowed from the public and children are hauled in from the audience to lift the bomb onto the trampoline. His demeanour is not friendly but is such that the audience can empathise with his travails. A sequence where he clambers through the audience with a blow torch which sporadically ignites is a health and safety officer’s worst nightmare.

Through more accident than design he succeeds in his quest offstage and reappears in white attempting to reach paradise. This involved using the trampoline to help him run higher and higher up the back wall which eventually falls forward and squashes him flat. A beautiful sequence which also illustrated the idiotic ideas which have been fed to real suicide bombers by those who have no intention of practising what they preach.

In another mode again Tilted Production’s Seasaw was a promenade dance piece set along the riverside. It used the landscape (park, lawn and churchyard) extremely effectively and showed a theatrical ability to place the audience exactly where it wanted them to be without the audience feeling that was the case.

There was a series of short dances based on watery themes in different spaces over the hour or so of the show, accompanied by mobile sound systems which played recognisable pieces of music. A picnic set to the Jaws theme music where human behaviour mixed with shark behaviour, a park-keeper with an unruly rubbish bag, dancers whose limbs were lengthened and bulked up by plastic bottles, seagull/dancers sliding around a wet polythene sheet and eventually being trapped in it, a dance on an iceberg, and another dance with rubber rings.

If I’ve made it sound like the piece has a message which they hit you over the head with then I’ve misrepresented my main impression, which was of an imaginatively weird and expressive dance where environmentalist themes were amongst many bobbing around on the surface. There was a lovely moment where a rope was put down on the ground to stop the audience in their tracks whilst the dancers floated away from us across the lawn in rubber rings.

If I had a criticism it would be that the piece is a bit too long – that eternal balance between content and abstraction.

Seasaw, Extrémité and Amortale were just three of more than 60 performances presented at Mintfest, and, to lapse into cliché, there was something for everyone in this year’s festival. Robust and immediate street theatre in the town centre, sideshows and more technically complex shows in the park, and a variety of site-specific events as well.

As a performer you used to look to France or Spain for those festivals where it seemed the whole town came out to celebrate. Over the last five years this feeling has travelled successfully over the Channel and there are now more and more UK festivals which are the equal of anything on the continent. The sun was out for once, but it was MintFest that lit up Kendal over the weekend.