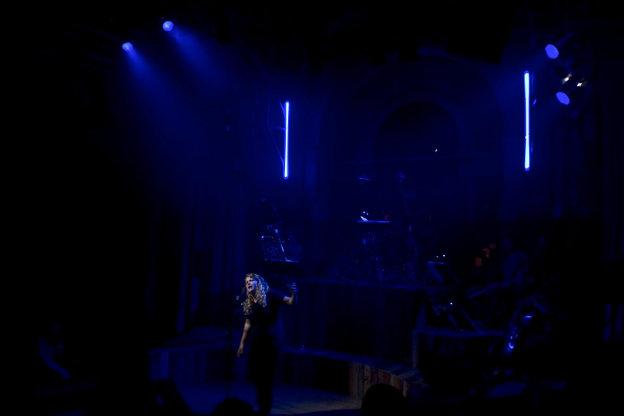 ‘Myths are the stories we used to explain ourselves’ – so begins Kate Tempest’s accomplished production of Brand New Ancients. This virtuosic performance uses spoken word and live music to celebrate ‘everyday epics’ and the gods that walk amongst us.

From the offset one cannot help but warm to Kate’s genuine charm as she greets the audience; in fact I cannot recall witnessing a more humble performer take to the stage. She launches into a Homeric plot that revolves around two couples and their offspring with dazzling linguistic skill; it is at once epic and everyday. She places the passions, the mistakes, the mundane foibles of the average person alongside the actions of the old gods of Greek myth. She gives the ‘normal’ individual a romantic importance, as she tells us in her opening song, ‘the gods are on the streets’. Her performance is very inspiring: highlighting our own potential for great deeds she tells the audience ‘greatness is a state of mind’.

But what brings the mundane so beautifully into the realm of the divine is her outstanding skill as a wordsmith. She can turn a phrase like few others, be it describing the beauty of a moment when a boy wakes up next to a girl and finds new places on her body where he can ‘just hang out’, or the menace of a character whose smile is like ‘a dog shit hidden in grass’. Her text flows perfectly as she explores the rhythms and beats in the poetry leaving the audience hanging on her every word. And the half-laughs and genuine smiles she affords herself at points in the story only serve to deepen our appreciation of this staggeringly skilful modern day storyteller.

The band behind Tempest, sat upon raised levels, consists of a violin, a cello, a tuba, drums and an electronic synthesiser. The sound they produce is unique and of a very high standard, and they provide a powerful and often haunting underscore to Tempest’s driving monologue. The drummer in particular, Kwake Bass, deserves mention for his wonderfully baffling skills in syncopation. Matt O’Leary’s integral lighting design is also notable for the way it helped to reflect upon and carry the story, flitting between states for different characters.

My one criticism would be that the music at times felt quite separated from Tempest’s narrative. Often she would stop at a point in the story and go and sit down while the band played. At first this allowed the audience time to digest the dense text, but after a while it fell into an unsatisfying and predictable pattern. Although it didn’t detract from the efficacy of the piece I couldn’t help but feel that potential was lost to really integrate the music with the text. In fact the few times that Tempest did perform a ‘song’ with the whole band behind her was when it really came alive.

Her humble nature too got in the way towards the end as she felt she needed to break from the text and speak to the audience when they applauded, telling them it wasn’t the end yet. At the opening this interaction worked well but at the climax of the piece it became jarring.

However, these small points should not detract from what was a spellbinding story, told with virtuosic skill. Seemingly destined for greatness herself, Kate Tempest is reminding us of our own importance along the way. Go see her and be inspired.