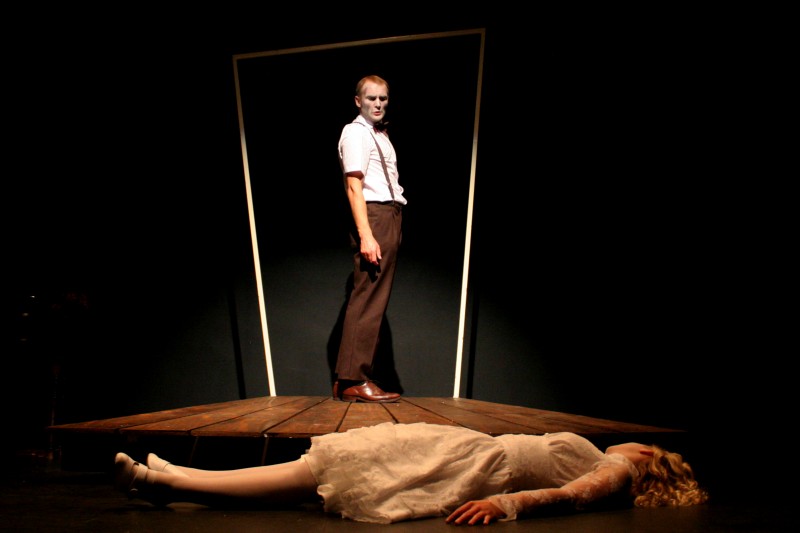 One static man on the stage, rigid within a warped frame. A loud boosh! The awaiting audience startles to attention. And thus, through a gothic expressionistic style of storytelling, with live music including cello and harmonica, we are led, through black and white tones, into the tale of Gwendoline, who lives by candlelight and cannot tolerate sunlight, a solitary girl with misted eyes who loves the moon. Ernest is her admirer, a night time voyeur who believes she belongs to him. Each is alone, yet not alone, as they are accompanied in their nocturnal vigils. She is by her window, bathing in the light of her beloved moon, and he, in the shadows, from his window, gazes across at her apartment, spellbound by her every move. She has no idea he watches her, watching the moon, no idea anyone knows how she loves her moon.

Written by Oliver Lansley, it’s Tim Burton meets Edgar Allen Poe with a thick dusting of Hitchcock. With touches of Tell Tale Heart meets Rear Window, Ernest and the Pale Moon is truly gripping. Atmospheric, under swirls of dry ice and strains of cello, designed by Zoe Squire and directed by Emma Earle, the set works as an optical illusion that distorts perspective, giving a perfect frame to all four actors who, through twists and turns, deliver us a tale of diabolical obsession.

One evening, this evening that we are witnessing, Gwendoline has a visitor; a chaste visit from an invalid neighbour. Our dear Gwendoline, with eyes too sensitive for sunlight, is innocently charmed by this injured soldier who admires her and carves for her bespoke candles. She isn’t used to visitors. When Ernest sees someone at her door, his heart pounds like a mother who has lost her child on a crowded street! Gwendoline doesn’t look to the moon that night.

Ernest and the Pale Moon employs physical storytelling, inventive design and great sound effects, such as knock knocking and footsteps, to strong effect. There’s a great stair climbing sequence, as Gwendolyn goes in search of her ‘star’, where you feel the sense of the ascent through the use of tightly choreographed movement and the change of angle of a pair of sticks used as bannisters, floors and railings. Distracted by a new bright sparkle that she sees in the night sky – the torchlight of her admirer/potential murderer – she is lured into entering the apartment of Ernest… and…

Performed beautifully and precisely, in story book style, I especially enjoyed the live sound, such as a clockwork scene underscored by xylophone and metronome. We witness the story unfold from each character’s different perspective, performed fluently by actors who move skilfully between storyteller and character.

Truly feeling a sense of dread, horror and pity, some of this show made me gasp. Especially a ghastly scene of entombment, bone breaking last snatchings of breath like the last drops of steam from the kettle spout.

There’s excellent use of lighting, colour and of darkness which I relished. There’s economical use of props such a torch used for moonlight, the stars, and the flash of the blade of a knife. The stunning stage design excellently framed and held the plot. The end held a clever and unexpected twist. Pretty shocking. There were many held breaths in the audience throughout, relieved only by the final bow and a shout of ‘Bravo!’