My good friend Dimitri sent me a line from Moscow two nights ago. It was in response to a letter I had sent to him indicating that I had some difficult decisions to make. Decisions involving employment, and safety nets, and courage. He said: ‘If we could tell what the future held, it wouldn’t be the future, by definition.’

This is not a review. It is a memory. It is also a contrivance aimed at connection. Theatre is all about connection, a shared moment, or as Robert Lepage would have it, an occasion for friends to use the firelight to make tricks and stories emerge from the shadows.

Some things I want to remember. I want to remember because the older I get the more I realise that the well-tended memories that arise in text, in performance, in conversation, are the most tangible things in our lives. The only works of substance. Transient for sure, but we are transient. Our voices, through which we announce our very existence and our individual identity, are thin as air and escape the body in order to be heard.

Here is a memory from over twenty five years ago. I am in the company of a young film-maker from Toronto called Peter Mettler. He is here attending the Edinburgh Film Festival with a film called, I think, The Top Of His Head. Whilst here in Scotland he is continuing to work on a new project. This project is to capture performance elements, and some supporting context footage from around the country, in support of a theatre project by his fellow countryman Robert Lepage. The show was called Tectonic Plates, and I have vertiginous  memories of books piled on a floor being transformed into a city skyline at night reflected in water, and also of two grand pianos dancing with each other, folding into neat alignment, drifting away from each other, becoming continents right there on the floor of Glasgow Tramway.

I am thinking to myself: Where does that show now exist? The film was released in 1992 but I have never seen it. Anyway, it would be a different artefact. A different memory. Anyone else reading this remember the show? What moments do you recall? Can we get together and compile this collective memory into a single representation of the show? Who would direct? Who – in film terms – would get final cut? And once complete, would we recognise it? 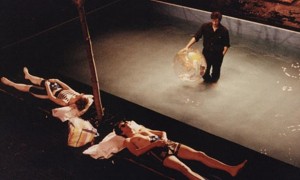 After Tectonic Plates, Lepage founded Ex Machina and has, since then, continued to pursue a path of often astonishing vision. Seeking to fuse the vocabularies of cinema and theatre, bridging outré experimentalism with the open-hearted dedication of the traditional storyteller, dualism, juxtaposition or constant realignment of seemingly incompatible phenomena are always close to hand. In Tectonic Plates it had been the music of Chopin and the drift of continental plates. In The Geometry of Miracles it was the life and work of architect Frank Lloyd Wright and the philosophy of Armenian mystic Georges Ivanovich Gurdjieff. In 887 the shape shifting and volatile configuration of francophone and anglophone influences on his Quebecois upbringing.

Lepage informed my sense of story. These days, I cannot begin any work in earnest until there are two or three seemingly unconnected voices. From those voices the work emerges to find me. Then, and only then, is the work real.

Central to his expansion – expansion seems most appropriate for an artist who has successfully taken on Wagner’s Ring Cycle for the Metropolitan Opera and whose Lipsynch production runs to nine hours – is his full on embrace of technology and craft. His production company, Ex Machina, harbours a community of set designers, computer graphics experts, technicians and multimedia artists with scripts commonly arising not so much from a writer’s pen as from the exploratory sandpit of hints, sketches, dreams, and technological proposals, nurtured democratically from this multi-disciplinary group.

Lepage informed my sense of loneliness, and cast a light on my feeling of theatre as the best place for an artist not to be alone. My work is lonely. I work, when I can, in theatre to escape that loneliness.

Other memories stir. Memories of huge casts, and rolling mirrors that present a multiplicity of possible scenes, possible stages. The copyright attribution, in the published script for Ex Machina’s The Seven Streams of the River Ota, 13 names. The show ran over by two hours. But at least it ran. Elsinore, Lepage’s one-man take on Hamlet, buckled beneath the collective weight of its numerous technical difficulties and failed to run in Edinburgh.

Lepage informed my sense of failure. He somehow assured me that it was unfortunate, but valuable. Necessary, even. 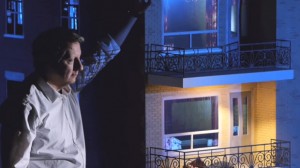 In 887, Ex Machina’s formidable mastery of scenic transformation, lighting, and technology is placed in the service of Robert Lepage’s memory. Having witnessed, as a boy, his grandmother fall victim to Alzheimer’s, Lepage is keenly aware of the fragility of memory, and so here he is accorded the indulgence to build his memories – apartment blocks, his father’s taxi, his apartment kitchen, a room by room walkthrough of a childhood Christmas home, a library, whose collapsing shelves reveal other rooms in another home, a detailed – absurdly, beautifully so – representation of his taxi-driving father’s favourite soda bar. What a luxury, one reflects, to be able to take wood, paper, paint, photographs, news clippings, and physically construct memory. Only, of course, to further reflect that the expense, time, invention and energy applied to the task are ultimately in the service of a theatrical performance that will exist only for 2 hours and beyond that merely in stills, and the memories of those who attended.

Lepage worries that his cold-cut – the prefabricated obituary written in advance of a celebrity’s death in order to facilitate immediate publication – will do little to recognise his contribution of almost four decades to theatre. Why? Because theatre is a connection made live between people in a shared space in a shared moment. There is taste, smell, the immediacy of emotion and the thrill of invention and magic. That kind of memory lives in the mind. It cannot be boxed conveniently, literally or figuratively, or digitally. There is very little filmed and recorded evidence of his output.

‘If a tree falls in the wood and there is no-one there to film it on their iPhone… Does it really fall?’

All of his family photographs, all of the family records, packed into five boxes, would take up 1% of his cell phone memory, he offers. As if to illustrate the irony that there is nothing tactile about the handheld, he lifts the lid on a box with the handwritten scrawled label ‘Nöels’ and uses his phone camera to swoop us down into a tour of a childhood Christmas, moving from room to room in the lovingly crafted dollhouse, individually wrapped presents, costumed and painted figurines gathered around a pipe-cleaner tree. He finally appears as a giant head peering into the front room of his own childhood.

We do what we can to keep important memories alive. And that goes for collective, social and cultural memories as much as our individual histories. Lepage weaves his own childhood development into the complex and volatile fabric of the collective Quebecois consciousness. Such is the process by which Lepage picks into the tensions that framed his youth between separatists and federalists.

The victor writes the memories, and in the case of Canada, the victors – or those who sought to protect their own self interest first and foremost; who got to determine the flag. So, what was originally a poetically realised embrace of diversity and geography (three peoples – anglophile, francophile and indigenous – represented by three maple leaves, bordered by two blue oceans) became a harshly realised statement of oppression and victory – a single anglophile leaf in a field of English red.

Speak White, Michelle Lalonde’s incendiary damning of linguistic oppression at the heart of the separatist movement looms large through the show. As clear an example of creative act as resistance as one could hope to find. And one that lives on in print and in commemorative readings (and also on film here if you’d like to check this precious recording made in 1970).

Lepage has, I think, offered us an act of resistance. Resistance to the fallibility and frailty of memory. But more than this, he recognises the limitations of a theatrical mode that cannot be archived authentically, or held up for future posterity, and he announces loudly, clearly and in the most protesting terms possible that this is, nonetheless, what he does, this is what works, and in the instance of the performance passing into the audience to be carried forward in the privacy of their own memories, it’s all that matters right now.

For my part, he is the kind of theatre maker that I want to tell my kids about. He makes the moment at hand precious, vital. He honours tradition, craft and discipline whilst endlessly pouring new processes, new approaches, new vitality into the craft. ‘I am an ephemeral person,’ he has said. ‘I will be a forgotten theatre person.’

887, transitory as it is and has to be, rebellious in nature, substance and form, an elliptical beast that views a piece of technology as common as a smartphone more in terms of what it can offer to a live happening than as a feeble prosthesis for diminished and undervalued memories, is a show that I will remember, cherish even, for as long as I can.

Dear Dimitri, Late last night I made my decision. I kissed each of my children in their beds, said goodnight to my wife and went downstairs to pen my resignation to the academy. I pasted a photograph of Robert Lepage to a sheet of paper and wrote: ‘From Michael Begg, aged 49. I am leaving now, because this is what I want to do when I grow up. I want to make better memories.’ 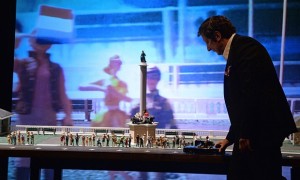