Mandy Dike and Ben Rigby, who work together under the name And Now: are interviewed by Dorothy Max Prior about their latest outdoor arts collaboration, Wayfaring

Here today, gone tomorrow. Everything in this world – its people and animals, its landscape, even the rocks themselves, are impermanent things. Sometimes the changes are slow, taking millennia, and sometimes things move quickly. But everything, everywhere is moving and changing, all the time…

This notion of transience is the key theme of a new work by artists Mandy Dike and Ben Rigby which premieres at the Norfolk and Norwich Festival in May. Wayfaring is an outdoor event combining installation with live performance and music – but it will be a very different sort of experience to the usual outdoor arts show. You will find no large PA system booming out electronic music, no massive great firework finale, no big theatrical sets that have to be brought on-site in large trucks. Instead, there will be structures made from the wood and other materials that are available on site, the artist and performers working with, not against, the environment; and a use of elements such as fire effects and acoustic music to create gentle animations of the space rather than overwhelming the natural environment. In Wayfaring, the audience plays an active part in the show – walking, looking, listening, singing, and moving in gentle choreographies from one part of the site to another, as a part of a group that takes on some of a sense of a pilgrimage, a truly shared space.

Mandy and Ben have been partners in work and life for 21 years, first meeting and working together on a large-scale outdoor arts show set on a boat by Manchester-based Walk the Plank, a company Mandy worked with for many years. She also worked with the legendary Welfare State International, creating spectacles with a political slant, then went on to co-found The World Famous, which made its reputation with large-scale shows using sculptural structures and pyrotechnics, such as the acclaimed Full Circle, which toured to major festivals across the UK and mainland Europe. The company no longer exists, but many of the people who worked for The World Famous have continued to contribute to the outdoor arts scene, for example by working collaboration with companies such as Periplum, creators of The Bell and 451. 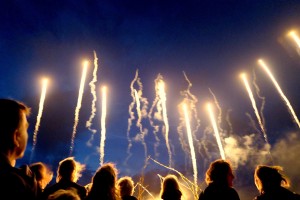 Ben frequently worked with Mandy on The World Famous shows. They are both visual artists and visionaries, and both have a strong belief in creating work that is accessible to as many people as possible – a view that comes directly from Mandy’s training in Art in Social Contexts at Dartington College, and Ben’s background in social sciences, anthropology and politics. In their work, they don’t aim to bombard people with socio-political messages; they don’t make shows ‘about’ environmentalism – instead, they want the way they work to be intrinsically sound and good politically and environmentally. When they work in an outdoor site, they work with the landscape and with the people, animals and plants within that environment; and when they leave a site, they aim to leave as little trace as possible. ‘We live it rather than preach it’ says Mandy.

They are both thinkers, but they are also both hand-on doers and makers. Whilst Mandy often leads on the visual design of the work, Ben has a pragmatic approach, sorting out the whys and wherefores. So the literal and metaphorical nuts and bolts of the structures and sculptures are created as a joint effort. Ben says that he is ‘happier not to be seen’, content to be in the background wielding a screwdriver or sorting out the rigging. But throughout the whole process, both feel that it is crucial to keep challenging themselves. ‘What is the nature of this?’ is a question they ask themselves constantly, and, ‘What is sacred and what is alien? What do we mean by “natural”?’ A tree that is protected in one area of the country is considered a weed in another. A landscape that we consider to be completely natural turns out to be carefully sculpted. We want to preserve ‘the past’ – but which past? The Romantic English landscape, the neolithic landscape?

In many ways, it feels as if the world has caught up a bit with Ben and Mandy: we are now in an era in which projects that bring together art, science and environmentalism are seen as something desirable: ‘I don’t think there are boundaries between art and science,’ says Mandy, ‘it is just a spectrum’ adding that the company aim to ‘make space for people’s imagination’. Their work is thought-provoking, ecological, spiritual even – but humour, and a love of popular artforms, is never far away. Expect a robust sing-a-long somewhere along the way! 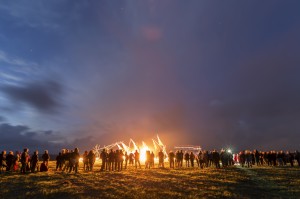 A work-in-progress version of Wayfaring was created for Dorset’s Inside Out  festival in 2016, and the company have subsequently entered a further long period of research and development. The new phase of the project  is inspired by the present landscapes and ancient routes of the Icknield Way, a pre-Roman pathway running from north Norfolk to the Dorset coast. In 2018, Wayfaring will be presented at three different Areas of Outstanding Natural Beauty on the 400-mile route. The Icknield Way is an ancient ‘super highway’ along a chalk path, and the particular qualities of chalk will be a key area of artistic investigation: made up as it is of the skeletal remains of tiny creatures that lived long ago, chalk is the perfect example of the transient nature of all life that is at the heart of the artistic quest of this piece. Animal, vegetable, mineral – all is interweaved.

The project will manifest in unique ways in each of the different sites, but the connecting threads will be the nature of time and journeying, resonances, and the notion of boundaries and liminal spaces – ridges, tide lines, and the space between day and night that we get at dusk. Mandy and Ben are very fond of the expression ‘the gloaming’ to describe this moment, and all the shows will take the audience across this line from light into darkness. ‘Just how often to people these days get to just be outdoors at night?’ they ask. What will actually happen is yet to be discovered, but both artists are keen to say that Wayfaring will be ‘us reacting to these particular landscapes’ and that bringing people together for this fleeting, transitory experience is an ‘opportunity for something special to happen that will only be for those people at that time. Stepping out into the unknown…It’s a leap of faith. Take a risk!’ They also want to stress that the work is for everyone. You can appreciate it at many different levels. ‘If you just fancy a walk, and to see a bit of night-time fire, that is fine.’

The first stop on this artistic journey will be in May, on the beach at Wells-next-the-Sea, as part of Norfolk & Norwich Festival 2018. The site was chosen purposefully as it is on the chalk ridge, but away from the woods, because at this time of year, the height of the nesting season, ‘there would be baby birds everywhere’, which the artists wouldn’t want to disturb. And it is not only the birds who have to be considered – backstage production and site management of a project such as this is immense. ’We had to get permission from the Queen!’ they say as the beach tide margin at Wells crosses crown estate. Ben and Mandy spent a week in residence on the site last May, and grew to love the space, with its strong tidal surges that create big changes on a daily basis, its sand dunes, and its odd ‘islands’ which allegedly have built up around abandoned vehicles.

And Now: are a company who believe in slow art, resisting the tendency to arrive on site for a one-hour show then disappear again to get to the next stop on the tour. They prefer the model they have created of a week-long process open to an audience’s involvement, so that they are ‘insinuating’ themselves into a landscape, slowly and gently. On the days in question, 21 to 26 May, the artists will arrive on Monday morning and begin to create the central installation, using local and found materials and objects including chalk, flint, reeds and perhaps even whelk pots. The local community, and people in Norfolk for the international festival, will be invited to come along and witness the progress over the next few days, and they will be gently guided into adding to or interacting with the structures. On Friday and Saturday evening, the installations will become animated by live performance, music and fire effects. This will be created by a dedicated team of regular And Now: collaborators, bolstered by a number of community performers. On Sunday, it will become uninhabited, broken down into its elements and carried away. The makers will sail away – perhaps literally.

Last word to Mandy: ’Everything is in flux, and we are just an element of that. We –the humans in all this – are not all that important!’ 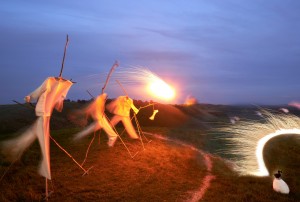 Featured image (top) and image above of  Wayfaring, Norfolk & Norwich Festival.: Imagery by And Now: Photo by Nick Read.

For more about And Now: see the artists’ website: www.andnow.co.uk

Wayfaring is the culmination of a three-year artistic and heritage collaboration between producers Activate, artists And Now: and the National Association for Areas of Outstanding Natural Beauty. It is an outdoor art event inspired by the ancient 400-mile Icknield Way.

The world premiere of Wayfaring is co-produced by Norfolk & Norwich Festival. www.nnfestival.org.uk

Wayfaring will take place at:

Wayfaring will also take place at two other sites on the Iknield Way:

Dorchester, Inside Out Dorset, 17 to 22 September 2018. See www.insideoutdorset.co.uk/