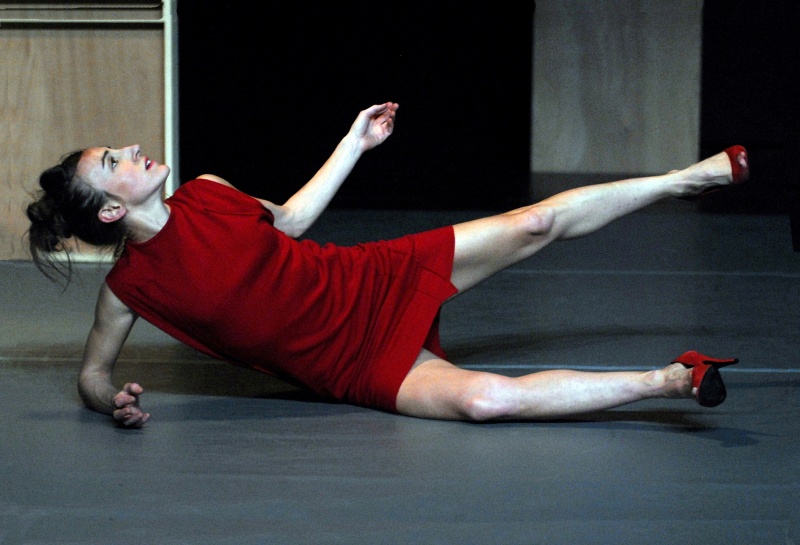 This taut trio from Catalan company Man Drake is tightly wound around the central physical motif of the staccato repetition of simple human action. A woman sits reading, her gaze gliding back and forth across the pages of a newspaper. A man stands, his head turning back and forth, his shoulders briefly engaging in the rotation. Each repeated gesture, each repeated action, is barely completed, the performers stuck in each fragment. Her face twitches back and forth towards a smile; the rotations of his head edge toward facing us. Inch by inch the movement advances, and as it does so the company generate a rising emotional tension. He reaches towards her, his hands appear to move to strangle her. Her head lifts as if to kiss or scream. The vibrating, oscillating movement makes the images hover between one meaning and another, between humour and despair. His hands caress her shoulders. She sinks into his grasp. The figures appear trapped between the drive to execute an action and a resistance to that impulse; this tension makes even the simplest of actions feel like pathetic attempts to fulfil the characters’ desires.

This approach to the movement, which is sustained almost throughout the whole piece, creates some beautifully compelling moments; even in the mundane puffing on a cigarette, for example. Similarly, as the woman and one man kiss in reconciliation, a second man is stuck in the moment of recoiling against (or is it escaping from?) a wall. The intense repetition of these fragments dilates each moment, drawing out the action and relationships for closer scrutiny. Like a continual loop of a two second video clip, the action allows the eye to trace the detail of human interaction. The deliberate ambiguity of each moment, say of kissing or screaming, perfectly illuminates the tension in these interactions, our desire to maintain the surface of our relationships in spite of internal turbulence.

The jolts of movement are perpetually underscored by a thrumming soundtrack of spinning and pulsing machines. This echoes the way in which industrial processes contort raw materials into useful products, creating a world that teeters on the edge of breakdown. This all makes for a striking experience, the intensity of this rhythm and the performers’ form exposing the irresistible biological drives underlying human behaviour.

Anatomia Publica opens, though, in a very different vein, but one that sets the context for the action precisely and pointedly. Company dramaturg, Véronique Petit, emerges from the darkness to outline the biographical source of the work: a soldier returns from war to find his wife living with another man, accepts the situation and joins the two to make three. This woman? The choreographer’s grandmother. This framing ostensibly provides a grounding context for the stylised form, not completely necessary, but a welcome one that lightens the load of the ceaseless oscillations.

Over the course of 55 minutes director Tomeo Vergés crafts a multi-layered imagining of the interior worlds of the trio, fleeting glimpses of jealousy, ecstasy, frustration and boredom are etched out on stage. Momentary relief is provided by brief passages of uninterrupted movement and a rather incongruous discotheque section, but these only serve to exacerbate the tension of the rest of the piece. But, in spite of the intensity of the sustained tension throughout, the piece never reaches a point of satisfying closure, and the last few minutes peter out. Strangely though this doesn’t matter. The physical memory of the tension is enough to take home, leaving a tangible sense of our own unresolved emotional frustrations.