Edward Taylor takes a psychedelic trip to the Stockton International Riverside Festival to encounter, amongst other delights, rainbow-coloured cars pegged out to dry, and sci-fi globules that sing sad tunes when taken the wrong way

Stockton-on-Tees is a most unlikely venue for a major international street theatre festival – but the event has been running since 1988 and has programmed most of the world’s leading outdoor theatre companies. The town has very evident social problems, shops are closing up and down the main street, the area voted to leave the EU – yet every year they welcome this festival with open arms.

This year, Jeremy Shine took over the reins of artistic director and booked Generik Vapeur (one of the big French companies) to open the festival in style with their parade show Droles d’oiseaux et art blaxon.

They weren’t quite the opening act though. To start with, the Rajasthani Brass Band played us down the high streets. A taut side-drum and a bass drum kept a constant babbling brook of a rhythm going which the sinuous brass melodies sat upon. 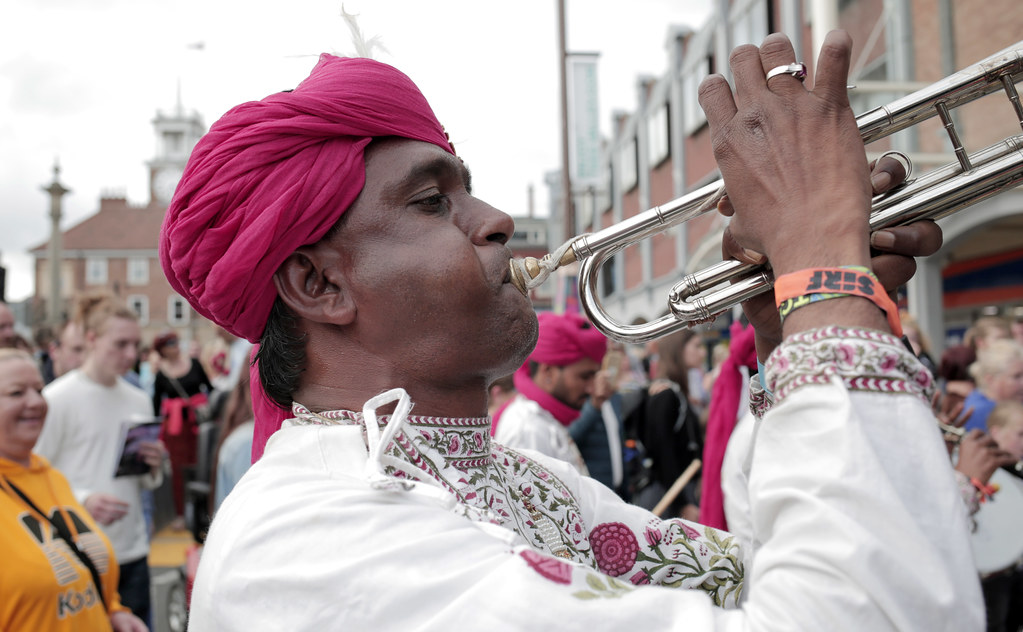 Once they had reached the bottom of the street Generik Vapeur’s PA system mounted on a tractor going in the opposite direction to the band took over. The music was synthesised, accompanied by musicians playing guitars, a trumpet and electronic percussion. A female singer added high-pitched wailings to this persistent groove.

The tractor pulled seven white cars around which swarmed a team of performers also dressed in white with a few of the team wearing a coloured trilby. This parade was lead by a man in white who used a roller on a stick to paint a white line on the road as he marched.

The parade came to a stop half-way up the high street. Buckets of house-paint and paint rollers appeared and the team set to work painting each car. The musicians added more layers of music as the team painted away and by the end the cars had all been covered in vivid colours – one colour per car. The emulsion gave a different quality to the slick car-paint we are used to.

The parade continued until we all reached a huge washing line with giant clothes pegs arranged along it. The cars were then winched up until they all appeared to be hanging out to dry. Iconic images (Marx, the Buddha) were bill-postered onto the cars’ under-carriages as a barrage of small and noisy fireworks were set off from behind.

The last Generik Vapeur show I reviewed for Total Theatre was, in my view, awful – but this show was simple, effective, visually spectacular, and played to their strengths. 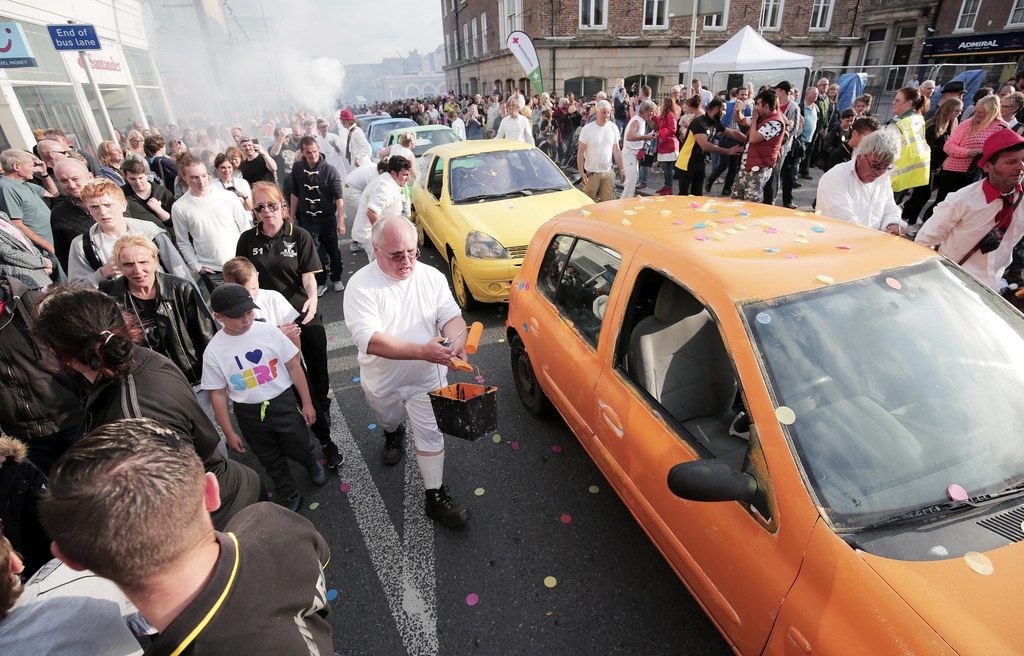 From that we went to Motionhouse’s latest piece, Wild. Motionhouse have a house-style which they rigidly stick to and whilst this allows them to create a lot of shows it also means that their development is hard to detect. This show had a team of talented dancer/acrobats hurling themselves around a set made of upright scaff-poles. A lot of the choreography took place on the poles but a lot was on the floor so if you were standing two rows back you couldn’t really see what they were doing. That I couldn’t see properly is testament to the company’s popularity (and the appetite that Stockton audiences have for this kind of work) but I would like to see Motionhouse abandon their formula and strike out in different directions, as Protein Dance managed to do at SIRF 2018.

The following day the highly experienced Avanti Display gave a text-book example of how you could present a street theatre classic (the circle show) in a fresh and funny way. Full Circle is played in the round and uses a variety of circular motifs, both visually and in the performance, to present a piece of street entertainment where the audience is actively involved, without the two performers (who look like members of a Swiss ambulance service) having to say a word. 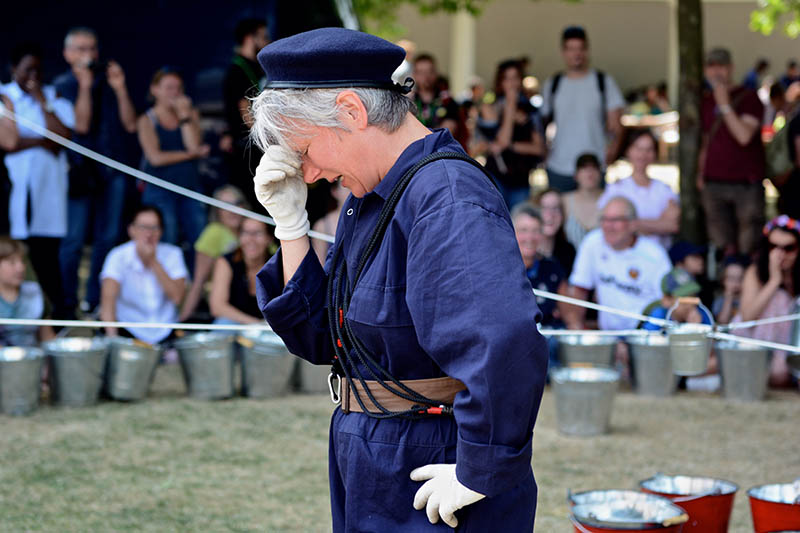 It starts off in a low-key manner with a large circular disc being rolled into a position. Red buckets are placed on this disc. The buckets contain an electronic gizmo which knocks against the metal like a metronome and which gives the initial action a slightly sinister almost subliminal beat. More buckets appear, a larger outer circle is drawn in sand falling from a hole in a bucket, the nearby van is opened, a ton of buckets fall out and children are roped into helping arrange the buckets around this outer circle.

What’s satisfying is that formal concerns shape the show, which is driven along by the performer’s experience. There’s no jazz-hands or monster-egos on display. Instead the circumference of the circle depends on the length of rope used to draw it out and that length of rope is worked out by the amount of buckets there are. It has an obsessive quality to it, but the audience are perfectly willing to buy into this obsession.

There’s a lovely section where a smaller bucket ‘hovers’ over the ground courtesy of four members of the audience holding ropes. To get the bucket to where it needs to be is not as easy as it appears, and there’s much fun in getting the four people to co-operate. 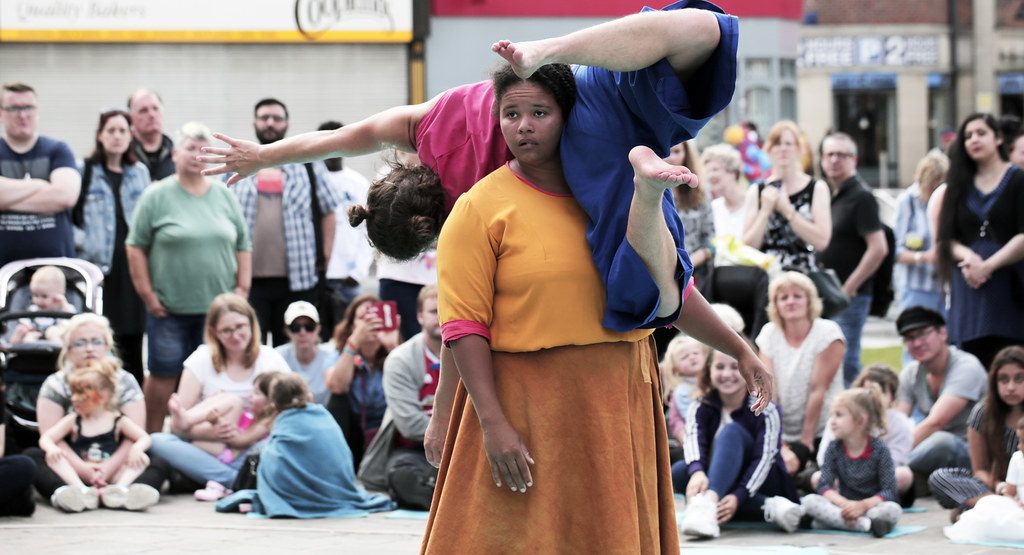 Mimbre are also experienced street theatre makers, and like Avanti bought this experience to bear in their latest show, Lifted. Three women performers, three chairs, a large green mat and a musical soundtrack.

It’s a series of acrobatic tableaux where the setting up of each tableau is as important as the final image. Each performer has a character but you never feel the characterisation is being acted out – it seems to emerge from what they are doing. The movement is fluid, it never looks like it’s a physical strain (though it must be) so it’s intensely relaxed. My quibble would be that at times it feels too relaxed, so the line between rehearsal and performance feels too faintly drawn.

I ended the day with Ray Lee’s Congregation. You gather at one of a number of designated sites (ours is an unremarkable spot over the river by the student accommodation buildings). A woman in grey stands next to a case of silver globules which are all throbbing away in a musical fashion. The globule has a happy sound (when you are moving in the right direction) and an unhappy sound (when you are moving in the…. you get the picture). You are each given a globule and your task is to find your way to the meeting point (which turns out to be the other side of the river in Stockton town centre, although we don’t know this at the start).

You are concerned with trying to keep this globule happy whilst people passing by wonder what the hell you are doing with a silver sphere emitting a rhythmic pulse. There are many conversations with curious passers-by en route. A group of globule-holders passed me by earlier in the day and they do look completely mysterious in a 1950s sci-fi film kind of way as they try and find their way ‘home’.

We got a bit delayed so missed the finale where all the globules played together. Instead of the effect being replayed for our benefit the globules were switched off and that was that – abrupt and a bit disappointing. So it felt that the company needs to work out how to ensure everybody gets the musical pay-off. (Editor’s note: they seemed to have resolved this issue by the last day of the festival, with all five or six groups plus stragglers given ample time to ‘congregate’.)

This year, the SIRF felt busier than ever – every show had a big crowd. My company (Whalley Range All Stars) has performed there ten times and it really is one of those festivals which appeal to the broadest demographic of age, class and race. When we first performed in Stockton in 1992 the experience was quite hair-raising. Now, everyone has a programme so they can pick and choose what to see. Long may it continue to be the case.