Stockton International Riverside Festival 2019 struck me as a festival in two parts. During the day and into early evening, the high street is a ringing, singing carnival of overlapping shows – static, circle, promenade. All very different propositions: from traditional street theatre, to tea dances, to acrobatics, to anarchic audience interactions… Edward Taylor paints a colourful picture for Total Theatre of some of the work that he encountered, here.

By night, the ‘riverside’ part of the festival comes into its own. On Friday evening, I see three very different movement-based shows on the riverside site.

Sisus Sirkus’ Mosh Split is a fabulous all-female circus show featuring five feisty Finnish women who do everything needed – aerial, acrobalance, rigging, counter-weighting, street dance, singing, and playing – in a girrrrrl power mash-up of top-notch circus skills, traditional Nordic music, and Euro-trash aesthetics all delivered with a high-energy Spice Girls sensibility. So good that I made sure I saw it twice, coming back on Saturday…

The show starts with each of the five characters appearing from their parked campervan (behind the 10-metre-high rig) and interacting with the audience. There’s the sexy one in black latex with her pet (plastic) chihuahua weaving through the crowd – prompting plenty of exciting interactions with real dogs and their owners. She’s fearless. Then there’s the wild-haired gal in leopardskin leaping merrily hither and thither. There’s the girlish one with the lovely smile, in her little booties and prettily patterned skirt; the funny one dressed in stripey leggings who goes round clownishly cleaning things; and the classy blonde in white lingerie with the (fake) fur jacket. ‘Pump up the Jam’ is the signal for them all to come together onstage for an energetic skipping routine, which leads into a ludicrously funny chewing gum skit, which all the little girls in the audience love. Let’s talk some more about those little girls: I don’t think I’ve ever seen such an enthusiastic response to a circus show from pre-teen girls, who follow their favourite character through the crowd in the pre-show, then clap and cheer ecstatically throughout the show, and when it’s all done burst out onto the surrounding grassy areas to cartwheel and handstand-walkover crazily. The next generation of circus perfromers is on the up! 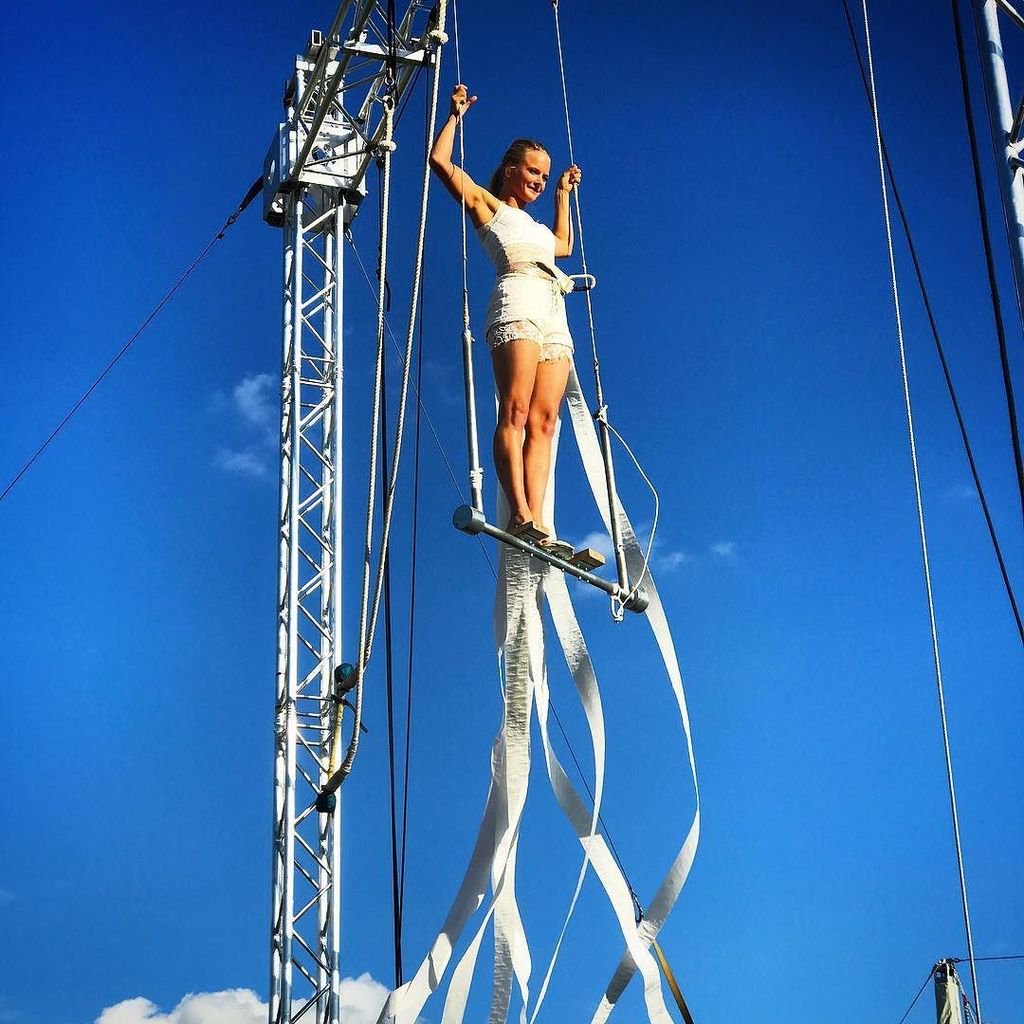 But then, at the very end, the tone changes. Gone is the trashy, rappy, pump-it-up soundtrack and the pop piss-takes. Instead, we have a gorgeous live soundscape created on a traditional Finnish instrument – a kind of dulcimer that I am told is called a Kantele. Whilst this angelic music sings out, two of the team are simultaneously soaring ever higher and higher on side-by-side swinging trapezes. Up and up, higher and even higher they go. Now they are so high, they are up with the birds, who are flying by over the water. It is gloriously beautiful and totally thrilling. Oh what joy you are, Sisus Sirkus! 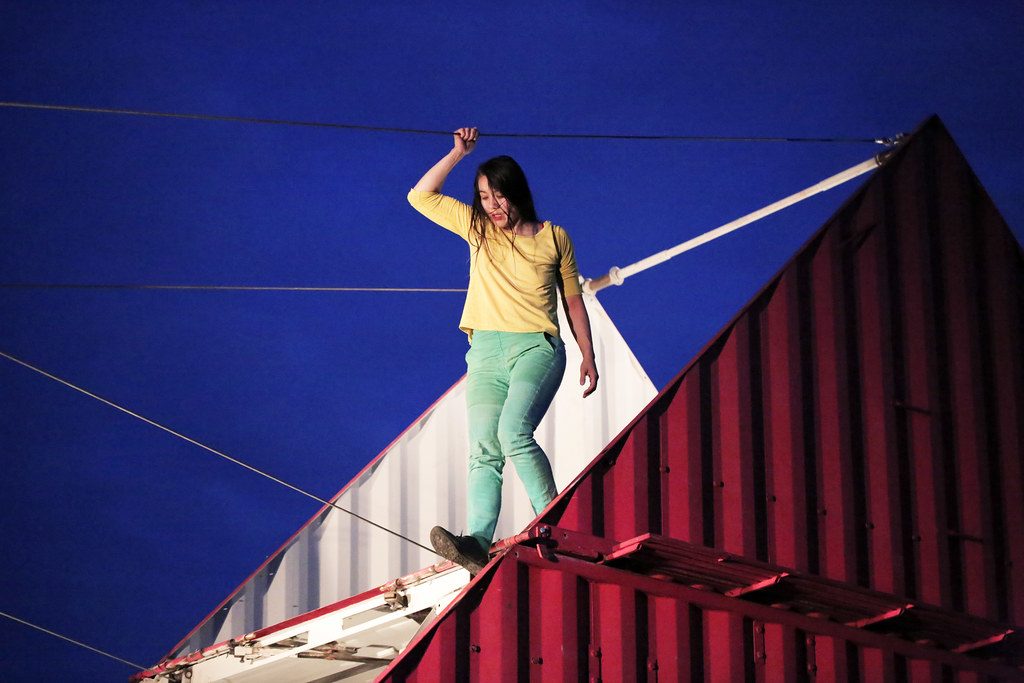 As the sky darkens, our attention turns to a large red shipping container across the way. We sit on a grassy slope and wait to see what happens. There are creaking noises, with the obvious association of old, wooden trading ships.

A female dancer (Satchie Noro) appears, cautiously moving over the surface. Slowly, very slowly, sections of the big metal structure open up, taking her up with it, or leaving her stranded. There are ropes drawn out between the metal sections – loose ropes which are swung from energetically, and tight-ropes that are walked across skilfully.

The piece, by French company Furinkai, is called Origami – and this is an apt name, as the massive and seemingly solid pieces of metal turn themselves from triangle to rectangle to square, and more. It is a beautiful piece, in a gently mesmeric way. We sit and wonder at the evolving shapes, geometric beauty for beauty’s sake; we reflect on the contrast between soft human flesh and hard industrial steel; we muse on the meaning of the imagery, which inevitably suggests a contrast, if not conflict, between (wo)man and machine, and a commentary on industrialisation and globalisation – what could be a better symbol of late-stage capitalism than the ubiquitous shipping container?

Origami is a well choreographed and beautifully performed piece – not a ‘big wow’ show, but one that quietly delights the soul with its clear and vibrant images. The structure itself, and its use; the performer’s movement and costume – all is carefully thought through and visually beautiful, a great unification of scenography and dramaturgy. 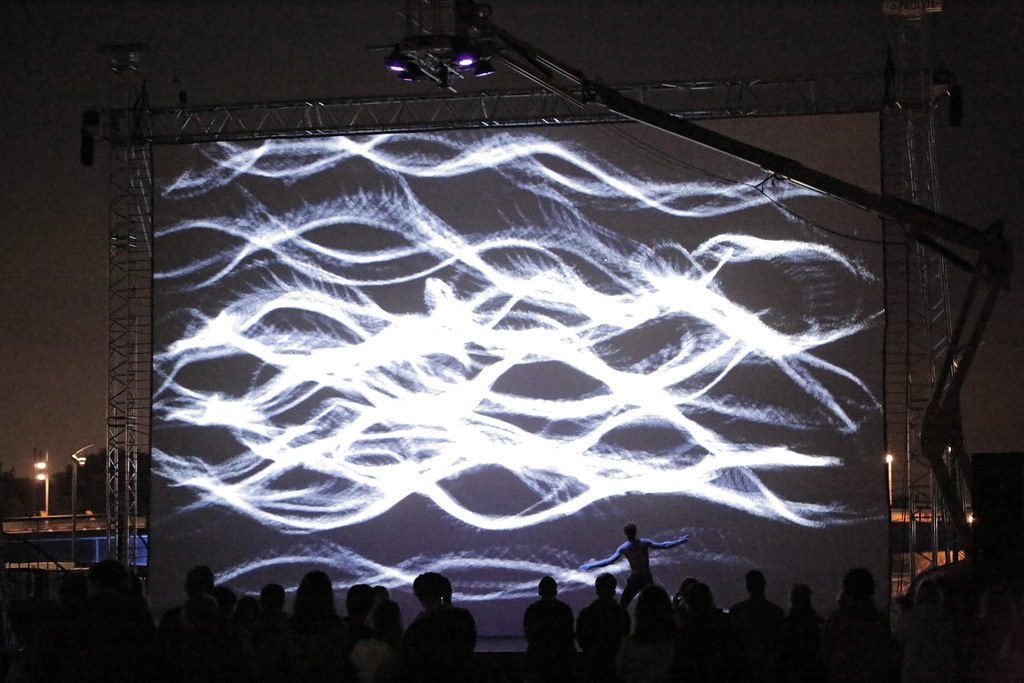 The third riverside show is by Vincent Glowinski (from Belgium) and is called Human Brush. And once again, the name is apt. You could go as far as to say that it is very much what it says on the can. Vincent is a living paintbrush, creating shapes and images with light on an enormous screen at the back of the outdoor stage. His dance is fluid and elegant, using the space and all levels expertly, gliding and turning and rolling. A suspended camera tracks his movements, which are then relayed with endless echoes – a kind of instant stop-frame animation at times; and at other times, a swirling screen-saver of digital imagery. It’s all accompanied by pounding beat-driven music. I enjoy the first 15 or 20 minutes, but then the intensity of the sound, and the constant strain of looking at blue-white light, proves too much for me – I admire the concept and the skill, but after a while I can’t really take the strain on eyes and ears, and move off quietly.

Heading away from the riverside, I walk along Church Road and catch the tail end of Korean company Muljil’s Elephants Laugh, in which performers and audience members find themselves immersed in tanks of water, in a piece which is inspired by the Haenyeo female divers of Jeju Island, who in their quest for shellfish endure terrifying moments of breathlessness. Having missed most of the show, I have no idea how people are enticed into the water – but the sight of the fully-clothed people bobbing up for air in the full tanks is certainly an extraordinary image.

As that show ends, I move on down the High Street – and encounter the strung-up cars that are the installation that remains following the end of Generik Vapeur’s show Droles d’oiseaux et art blaxon, which had been seen on the opening night of the festival. Standing close, the cars seem larger than they appear to be in photos, looming up proudly in the deserted street.

The one evening show that I miss, sadly, is the festival’s close, Hotel Watercage, by Dutch company Theater Tol – an aerial show that, it is said, investigates the battle between head and heart. As I leave Stockton town centre on Sunday evening, I see the giant birdcages dangling from their rig, waiting to be populated by the human ‘birds’ that will fly into them later that evening. It is a beautiful image to be left to muse upon as the train pulls out of Stockton station and heads off along Britain’s first every railway line. 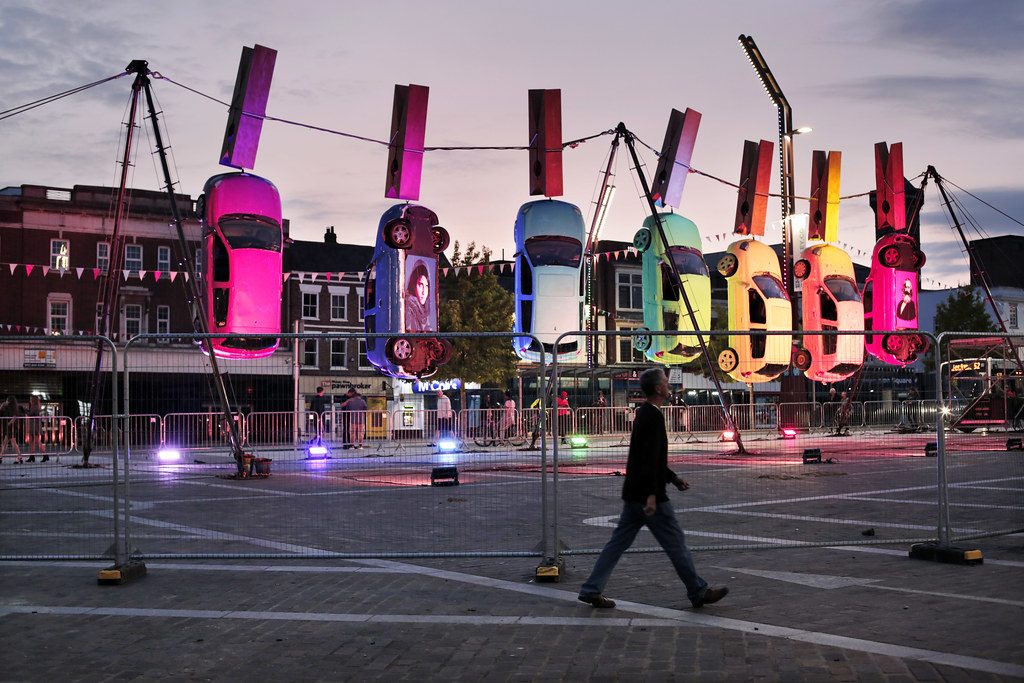