Two shows for small audience groups, set around tabletops, in rooms squirrelled away in the basements of arts centres. But oh such different shows! 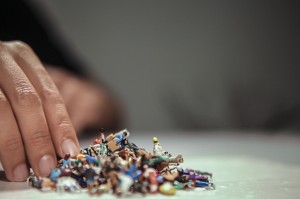 David Espinosa’s Mi Gran Obra works on creating distance; playing with scale. Although we are tightly grouped around the table – tall people on high stools at the back, shorter people on low stools upfront –we view the scenes enacted with tiny models on the tabletop through opera glasses. When Espinosa’s hands come into view, we jump back at the sight of the hands of a giant. Or of a malicious god toying with his creations – this is, after all, a show exploring the theme of megalomania.

The piece works as an evolving series of tableau in miniature. Tucked beneath the operator’s table (Espinosa does everything in this show – object manipulation, lights, sound) are trays of tiny model railway people, plastic animals, and toy helicopters. Also to-hand are a reading lamp, a couple of red bike lights, a pot plant, and a tambourine. On the table, a pair of mini speakers each sport a band of musicians perched aloft: a rock group and a military brass band.

The first tableau gives us a procession from cradle to grave, a diagonal line across the table. Later, we see a fabulous wedding photo group that features a Mexican Mariachi band; a beach scene sporting posing athletes and a posse of toy bulls, with a car crash to the side; an even more surreal scene featuring elephants, monkeys and Santas; and a magnificent miniature sex scene, in which the earth moves… and moves. The pot plant serves as a graveyard; the bike lights turn the tabletop into a disco, replete with pole dancer; the tambourine becomes the podium for a kind of open-topped doll’s house, where the beds get put to good use, until the savage god hammers nails into the tambourine, sending everything flying. The soundtrack gives us an eclectic mix, from Mexican marches to Latino covers of hits like Hotel California.

If there is a reservation, it is in the use of a tablet screen, integrated into the action on two or three occasions. It is hard to see the screen if you are sitting to the side of the table, and in any case it feels an irrelevant addition.

That aside, Mi Gran Obra (subtitled ‘an ambitious project’) is a fabulously clever adult take on the childish pleasures of play – anyone who has ever enjoyed Playmobile, Lego, or Sylvanian families, or perhaps liked those bargain packs of plastic model soldiers, will appreciate the appeal. In David Espinosa’s hands, his little model people (bought from Hornby Trains and numerous other companies across Europe) become the actors in a grandiose theatre with a cast of hundreds. Life, death and everything in between is played out before our eyes, with humour and pathos. When the tiny people are squashed by giant hands, or bulldozed into a pile, there is an audible intake of breath in the room. Luckily, the piece ends with an image of hope – a great relief. A postmodern puppetry for the modern world. 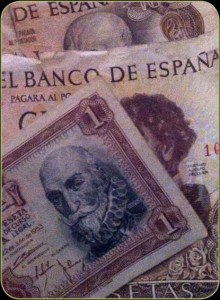 Xavier Bobes’ Things Easily Forgotten is a very different beast; a show that from the outset celebrates intimacy. Espinosa delivers a mini-lecture at the start of his show, explaining his motivations and outlining the provenance of the show, giving us the intellectual task of imagining that what we are about to see would exist at 37 times the scale, if the little people where life-size. Bobes, on the other hand, keeps things close to his heart. As we enter the ante-room, he is firmly in performance mode: not quite ‘in character’, but certainly ‘in persona’, dressed in a neat brown suit and tie, and sporting an elegant wristwatch. Our vintage tickets are clipped with a hole-puncher, and we enter a dark room.

As the audience of five sit down, placing our hands on the table as a candle is lit, it feels for all the world as if a seance is about to begin. And indeed this is not so far from the truth – what we get for the next thrilling 75 minutes is a cross between a seance, a family gathering, and a magic show, as the dead of Spain’s twentieth century are conjured up for us through an extraordinary array of printed ephemera, everyday objects, and crackly sounds that  come from a vinyl record player. Our host holds the space beautifully – sometimes silently, sometimes drawing us in with text. At the end, we are asked not to reveal too much about the show, so I will honour that request and refrain from saying what he does and how he does it, and focus instead on how it makes me feel.

It leaves me with the sort of bittersweet melancholy you feel when you find a cache of old photographs in your grandmother’s wardrobe; or you find an old newspaper in a junk shop that is from the year of your birth. It appeals to the part of me that is fascinated by portraits of people I don’t know; whose lives are frozen in a moment in time – forever young, or forever ‘just married’, or forever walking down that seaside promenade. If you are a hoarder, who keeps old matchbooks, redundant banknotes, and souvenir keyrings in dusty corners of your loft, then this is the show for you. There is an added poignancy for anyone with an interest in the painful history of Spain over the past 100 years, particularly the Franco years.

It is a theatre that finds a novel way to create a linear narrative – a timeline that tells the history of a people through the things they leave behind; creating a shared space of evocative sounds and images that I leave feeling touched and nurtured.

I applaud the brave and good decision by the London International Mime Festival to programme these intimate works for such small audience numbers. Small in scale, big in ambition: Mi Gran Obra and Things Easily Forgotten are both beautifully crafted visual theatre works that added something special to the festival – grand works that won’t easily be forgotten.

Presented as part of the London International Mime Festival 2016.