Rebecca Nice is there for the 41st Winchester Hat Fair

In précis: this year’s programme, running 3–5 July, consisted of several Without Walls commissions including Gandini Juggling Company’s 8 Songs, Cathy Waller Company’s Louder Than Words and Stopgap Dance’s Bill and Bobby, (also seen at Greenwich + Docklands International Festival, reviewed here). An additional Without Walls commission, Southpaw Dance Company’s Carousel, formed the Saturday night finale that ran into a street party. (The evening before, Co.LABse’s A Table for 2 had transformed Winchester’s shop fronts into a moveable feast.) Sunday, as is the tradition, took Hat Fair to Oram’s Arbour, a large green set apart from the historic city centre, where families follow a series of Hatting artists busking for their earnings on four pitches, alongside a reduced Hat Fair schedule for the town centre that included Wet Picnic’s Suitcases, presented in the Cathedral outer close… 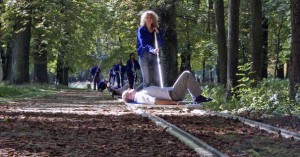 Historic Winchester comes alive with festival fever for the Hat Fair weekend. Gourmet food stalls, strawberries and flowers pop up around the town, and Winchester Cathedral runs a BBQ in the outer close to feed the many visitors and artists that bring a buzz to Winchester over the three days. The Medieval city’s layout, with its old pubs, crooked alleyways and narrow streets, frames performance spaces and contains audiences quite naturally within the designated sites. Around every corner is a new space, from the back of Waterstones to the Cathedral’s buttressing. The Great Hall and Cathedral’s outer close provides larger areas for multiple acts, offering backdrops of gothic architecture, law courts, or leafy graveyard.

Turning the corner to the right of the Cathedral’s west front along Curle’s Passage, the music, laughter and crowds are left behind, and a sun-filled oasis of calm ensues as a thoughtful and informative performer explains Graeme Miller’s Track, whilst a small queue forms for this site-adaptive installation. It consists of a track installed on the uneven paving, in this case along the outside wall of the cathedral, beneath the buttressing that forms a series of arches under which the piece promenades. Participants lay on a small wooden surface and as they do, a relationship of trust and care develops between them and their personal gondolier, who watches over them and their journey. The sensory environment becomes the focus of the piece as the horizontal becomes the vertical and the perception of the surroundings become a series of noises, smells and visual fantasies. The creaks and clunks of the tracks, a cathedral side door opening, the shapes of the gothic tracery, the sensation of movement at a slow and methodical pace, create a visual otherworld that is hypnotic. On disembarking and walking back along the path just travelled, it is hard to connect the two worlds. The simplicity of Track, should not be underestimated. The personal interaction between audience member and gondolier combined with the transience and beauty of the view from the track creates something more complex that separates participants from the atmosphere of the rest of the Fair just metres from them. 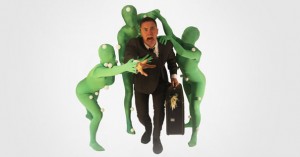 Wandering back into the Cathedral outer close, Wet Picnic – graduates of the University of Winchester (which now offers a degree in Street Arts), and subsequent supported artists of Hat Fair – return to base to warn happy picnickers of the dangers of the internet. True to form, Suitcases is a raucous affair of live song, accurately sourced Britney moves, and 90s jazz dance, with a running commentary that both humiliates and worships a scientist displaying his emotional baggage over the internet. Highly visual and colourful, the world of technology is turned on its head by its reinvention in tangible form, with a stream of tweets pulled out of the performers’ mouths and the Twitter symbol turned into blue-feathered love birds. As I am pulled into the performance area, to play the scientist’s one true love, I manage to form a series of tableaux with the actors as they subtly direct me whilst throwing gag after gag. Plans to develop this cabaret-style vignette will allow the narrative to develop into a full-length piece. Wet Picnic’s narratives and themes are well thought through and current; but more importantly, they provide a framework to highlight the charisma and passion of the company’s energetic and hilarious performers – it almost doesn’t matter what they are doing because they do it so well. The choreography of each raised eyebrow and quivering lip demands attention, and prompts empathy and laughter in equal measure.

The Abbey Gardens by the Guildhall allow more picnickers to watch acts amongst the flowers, and a mobile library provides an unusual setting for an outdoor festival piece. The Quiet Volume, by Ant Hampton and Tim Etchells consists of a podcast designed for two with a series of readings and instructions, prompting participants to read, observe and consider notions and functions of site and the body in the moment. Settled at a desk in a van surrounded by books, the prospect of reading for an hour is thoroughly daunting, particularly as the festival entertainments can be heard outside and the possibility of missing something makes the choice to take part somewhat risky. The time flies by, however, and the noises and reflections of people in the library van window allow participants to remain a part of the Fair whilst the piece creates a new site and function at a desk, evoking an original site with a similar function in a library. This transformation and layering of site and its function is combined with the notion of the body in space and what it means to read. By being told what to think and imagine, when to read and how to move, audience members consider what it is to be alone with your thoughts, but united to a stranger through the podcast instructions. The layers of connections and disconnections with the outside world and the visual text and observation of the body give this piece significance whilst the joy of reading and consideration of text make the delivery unusual and cerebral. 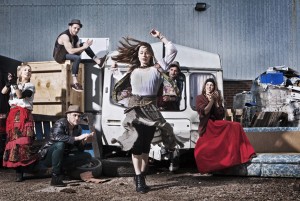 Without Walls commission Carousel, by Southpaw Dance, saw a large company of dancers perform on a constantly revolving stage. High in energy and physicality, the piece was enjoyable – evoking a rather old-fashioned ‘fairground gypsy’ theme, and comprising a movement vocabulary that mixed contemporary dance with a dash of breakdancing, folk dance, and tango – but felt a little lacking in terms of choreography and narrative. This finale act of Hat Fair on the Saturday night was well attended and created a carnival atmosphere, but artistically was eclipsed by Co.LABse, who provided the finale on Friday night – the company’s stunning aerial work, clever use of props, canny collaboration with local businesses, and inventive use of several Local Authority buildings combining to create a great event.

As the evening draws in, Winchester’s crowds move in to the Broadway and regroup with the night-time drinkers. Co.LABse take over the frontage of the council building just round the corner. They use the levels of the building to portray different scenes in a fictional restaurant, and a large and growing audience view the antics inside through the windows. Tableaux images and recurring jokes work to draw in the audience, who after a lengthy introduction are fully committed to finding a new restaurant after the chef blows this one up. A sense of camaraderie and togetherness comes through as what seems like the entire population of Winchester marches down the street, following a trail of furniture carried high above the performers’ heads. After taking over shops and pestering traders, the performers settle at the Guildhall. A kitchen is delivered by a van driving directly through the audience. Music cues alert you to each change of scene whilst chaos reigns in multiple areas. From the dressing of the waitresses below, to the Chef’s kitchen deflating; there is even a Champagne launch led by a waitress dangling down from the tops of the building, suspended against the neo-Gothic windows: she empties her bottle over the crowd who have been given umbrellas in preparation. A Table for 2 encapsulates Winchester’s identity with Hat Fair. It is a festival loved and supported by residents, artists and businesses alike – and Co.LABse brings this community together in appreciation of a perfectly-pitched piece of outdoor theatre. 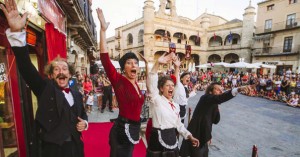