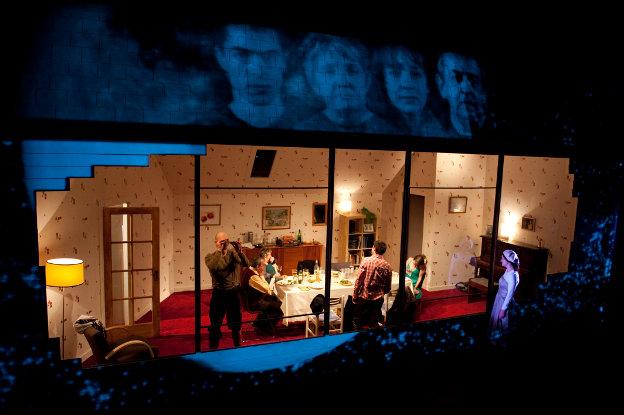 Interiors has an intriguing, almost sociological, premise. We observe, through an enormous, stage-wide window, a midwinter dinner party. The table is laid, the guests arrive, there’s music, food and alcohol. We observe their interactions, the interplay of social expectations with private impulses and conflicts, as narrated by a mysterious voice, later seen to be a white-clad figure, also watching at the window. But all is silence: the glass may as well be sound proof. We are absolutely engrossed and absolutely removed, out in the cold, the sound of snow creaking around us as the wind howls.

Perhaps we are out in space: the play of enormous projections that beautifully frame the window suggests dark waters, particles floating in and out of focus, a chill night sky. This world is expansive and the theme of hopeless aspiration in the party’s attempt to ward off the existential darkness or meaninglessness of winter, of the universe, of life, is reiterated by the narrating voice. Inside too, the setting is ambiguous: each character checks their guns at the door as they arrive, and the narration is laced with menace, made all the more threatening by the fact that it is never fully articulated.

Against this philosophical bleakness the social drama of the dinner party plays out. The silent performances are incredibly detailed but I found the tone unsettling, at times even crude. The necessity to fully articulate moments of storytelling through the glass led to several rather forced interactions in mime that sat unevenly with the precise naturalism of the piece as a whole. I felt the director Matthew Lenton didn’t quite trust us enough to spot gags in the action without emphatically pointing them up (a character coming to face directly out at the window to spray her crotch with perfume in preparation for her date for example). Overwhelmingly my sense was that these characters were played for laughs: more than that, that we were encouraged to laugh at and not with them, and this really troubled me. The narrator’s wry commentary punctures the social posturings of the group with incisive, sometimes cruel insights (What’s that smell. Is it Anne? Oh… it is) and the farcical treatment of the characters undermined the pathos that the overall frame seemed keen to evoke.

A climactic scene outlining the random cruelties of the characters’ future fates (a nice anti-naturalistic touch) left me feeling angry and rather sad. I didn’t feel the company earned the right to trade on the pathos of these characters’ demise when their principle use had been as comic fodder in the preceding scenes.Interiors was an intriguing concept that felt somewhat compromised by some failure of confidence in its form and desire to make profound points by usingcharacters without really caring about them.