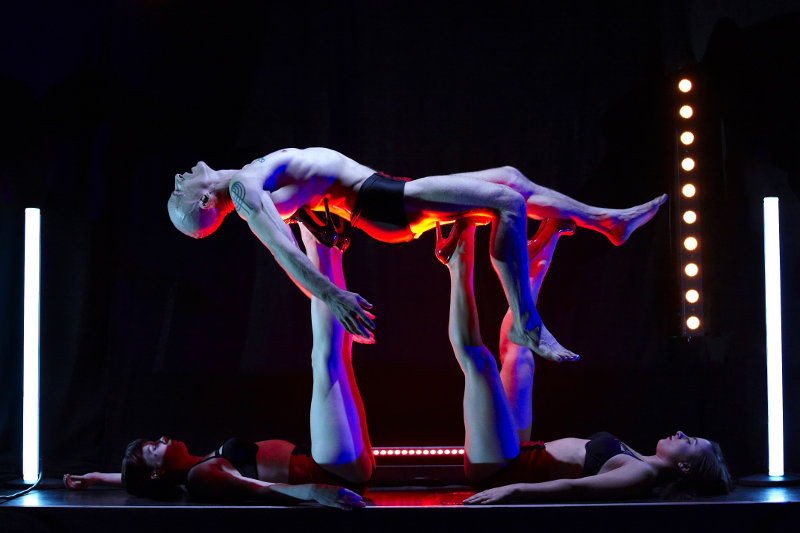 It was something of a golden year for circus at the Edinburgh Fringe 2013 with some astonishing work. It’s fast creating the argument for a dedicated circus section of the brochure; ‘dance and physical theatre’ just doesn’t cut it any more, Ed Fringe. Now sort it out before a hundred angry jugglers come knocking at your door with their clubs.

PRS must have been pretty busy in August also. In every production I saw there was a helluva lot of tunes, both obscure and esoteric. I found myself frantically Googling lyrics every day and am presently compiling a Spotify playlist based on the shows I saw. Yes, there were some real geeks soundtracking circus out there this year, and being such a muso-nerd I appreciated this. So in that same spirit I am going to compare each production to an album as a handy shortcut for my fellow music/carny loving brethren.

Gravity & Other Myths’ A Simple Space was just that – stripped down, spatial and utterly effortless. Like the better-humoured cousin of Casus’ Knee Deep (also making a welcome return this year), this Ozzie ensemble (what exactly do they put in the water down there?) flipped and flew and glided, grinning like Cheshire cats throughout. We got some bare-buttocked skipping and an invitation to distract the troupe by throwing a few hundred balls on stage, which we willingly obeyed. Self-trained, self-produced, uncynical, they epitomise the spirit of DIY culture down under. ALBUM: Totally Enormous Extinct Dinosaurs – Trouble.

Japan’s Cheeky Park are not the best-skilled artists on the planet and they managed to shoehorn pretty much every circus medium going into Company Man, but they made me smile – lots. With some delicate ensemble work evident, if they concentrated more on their clowning and ditched the rudimentary silks and acrobalance then they’d have a sharp, comedic little show. ALBUM: The Monkees – The Best of the Monkees.

By all accounts, The Gandinis’ Smashed will run and run, and so it should. It’s been around a while now but to Edinburgh it was fresh meat, and the ten-strong ensemble relished this rebirth. The initial polite and genteel set-up totally wrong-footed the audience as it built to its heady climax of balanced destruction. After twenty-odd years, The Gandinis have found renewed energy and a new audience for a much maligned medium. More power to the ball. And the teacup. ALBUM: Blur – Modern Life is Rubbish.

My local Chinese in Bethnal Green serves a ‘special noodle soup’ with fish, prawns, beef, chicken, pork, pak choi, chilli and ginger. It’s tasty but confusing; as was NoFit State’s ‘theatrical’ departure Noodles. It’s a brave company that chooses to experiment on the Fringe on this scale but experiment they did. The close-up magic was lost in the space, the interlinking TV show set-up was clunky, but amidst the chaos was some fine, textured performance. It needs an outside eye, more direction and some sort of (*gag alert*) thread. Whilst still a little all-over-the-shop, there’s the makings of an interesting and enticing visual show here. ALBUM: Japandroids – Celebration Rock.

One of the big hits of the Fringe this year, Circa’s Wunderkammer was controlled and pure. In a giant, unforgiving space (the McEwan Hall) with hardly any equipment, they held the audience through sheer showmanship, charisma and some intricate, challenging ensemble work, as well as pretty much the finest Chinese pole duet I’ve ever seen. Seamless, sexy and utterly brilliant. ALBUM: Tom Waits – Mule Variations.

3 is a Crowd hail from (sheesh) Australia and their offering Fright or Flight was a surreal but charming little number. Ornithologically-themed, some neat juggling and quirky, tricky aerial work was skilled and underplayed. Quite beautiful, and very dry, they made my heart flutter. ALBUM: The Beatles – White Album (side 3).

Back to NoFit State, doing what they do and storming the Fringe at the same time. Bianco has matured and grown massively since I caught it at the Roundhouse. The overriding sense of achievement was highlighted by the fluidity, strength of character and celebration throughout. They’ve pretty much nailed it with this one. It’s pure spectacle with some pin-dropping moments of silence to break up the frenzy. Expertly performed, choreographed and directed, we should be thankful to have them on our shores. ALBUM: Grinderman – Grinderman II.

Lost Dog’s It Needs Horses wasn’t quite circus – more anti-circus – but to see the medium satirised and subverted by a fine duo with dance, comedy and tragedy was a delight to behold. Short, sharp, mesmerising, a total highlight. ALBUM: Sharon Van Etten – Tramp.

See you next year, circus freaks.

Pirates of the Carabina’s Flown, presented by Crying Out Loud at Underbelly, won a Total Theatre Award for Physical & Visual Theatre.

Circa were awarded the Total Theatre Award for a Significant Contribution, in honour not only of Wunderkammer (presented at Edinburgh Fringe 2013), but of their other shows seen in the UK in 2013 (including How Like an Angel and Beyond), and for a body of work which, over the past two decades, has contributed to Australia becoming a world leader in the circus arts.