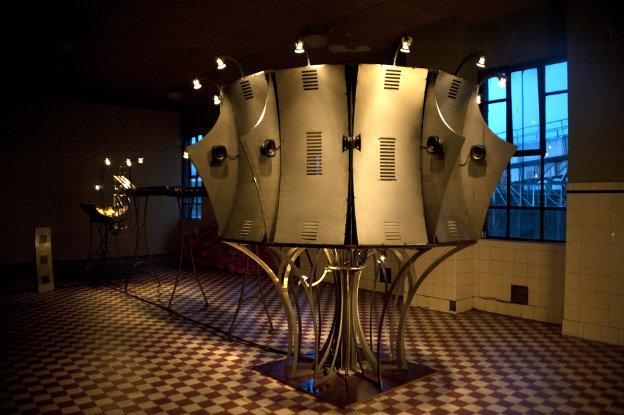 The Old Municipal Market is known locally as the former fruit and veg market. It’s a fine old space that’s seen better times: a great big, cold, dark and dripping hulk that has been the venue for many so-called ‘site-specific’ performances over the years, by both professional artists and ‘VPA’ (visual and performing arts) students from what the old-guard call the art school – otherwise known as the University of Brighton, which is right next door to the market.

What the Berlin Theatre Group – who are in fact from Belgium, not Berlin – are doing here with Land’s End is difficult to fathom. It is hard to think of an example of a potentially good show more inappropriately sited.

It is, in essence, a two-part piece. In part one, the audience are let loose in the warehouse and wander freely around, viewing a number of installations which reference a murder most foul. Some are obvious references: a section of a car with feet sticking out of the boot circles on a creaking turntable; a split-screen video depicts a man crashing down a staircase; a cranky conveyor belt sends a cup of coffee on an eternal circling journey, the coffee augmented by a sickly green powder. Other exhibits are more puzzling: a trough of goldfish with plugged-in hairdryers hanging over them, menacingly; a listening-post set around an onion-chopping contraption, that on the night I attend is one of a number of the mechanical structures that isn’t working properly. Coming close to the listening post, we hear a series of unanswered questions, related to the topics of personal relationship, anger management, and witnessing: How is your memory? Do you remember what you see or what you hear? How do you manage guilt manifested by others? Are marriages made in heaven? On the floor next to the onion-station is a sign that says ‘I never cry in public’. In one part of the market is a bank of seats and some free-standing film screens: ‘This section isn’t open,’ says an usher. ‘It is something secret.’

A not very well-kept secret as the impatient audience, bored with the installations and chattering loudly, have by now mostly gathered at this part of the market, waiting for the next thing to happen. A looped electronic soundtrack kicks in, and everyone crowds in to sit in the regular tiered theatre seating arrangement. Except that this is a freezing cold warehouse, not a theatre, so the next hour is marred by cold and discomfort, making it hard to appreciate what is presented.

And what is presented is good: a clever and interesting mix of live and filmed action, blurring distinctions between fiction and reality as the words of ‘real life’ on-screen interviewees, and live and screened actors, mix stories both banal and harrowing – all centred around reflections on the fate of a farmstead that sits on the border between France and Belgium. There is, for example, a bizarre story of how hard it is to get the roof fixed when half of it is in one country and half in another – one legislation granting permits immediately, the other taking six months; one allowing Velux windows, another forbidding them. Weaved into all these amusing odd-bod tales of life lived in two countries is the key story of a murder that took place in the border country, provoking all sorts of complicated legislative proceedings which are played out in the dining room of the borderline farmstead, requisitioned for the purpose – a line literally drawn down the middle of a table separating the two suspects, the victim’s wife (Belgian) and the alleged assassin she has hired (French), who are seated at each end, in separate countries as neither extradition for him nor border-crossing for her are possible. Less a recreation of a true-life event, although indeed based on a true story, the show is a clever deconstruction of the issues raised by the case, and the absurdities of the legal proceedings (the Belgian woman has to enter the house through a window as the door is in France; the French man has a portaloo so he doesn’t have to enter Belgium to use the toilet). References to Kafka are many and various in the company’s programme notes!

It’s a great story, the twists and turns of ‘what really happened’ worked through cleverly in tandem with the townsfolk’s reflections on living simultaneously in two countries, the issues of nuances of language, cultural differences, and miscommunication being key to the main story – this played out very nicely in all the intermingled texts in two languages, French and Flemish (with English surtitles adding another layer of meaning). Ultimately, it is less about the murder than about the relationship between the wife and the hired man – an exploration of communication and miscommunication, similarity and difference, saying and meaning.

Had I been seated in a warm and comfortable theatre – where this piece would most appropriately have been sited – I would have felt that I’d had a good theatrical experience. As it was, it was hard to separate my response to the work from my physical discomfort – the choice to put its audience into seating banks in a freezing cold warehouse seemed more bizarre than the stories that unfolded! And the linked installations, although amusing, ultimately added little to the main piece – turning out to be a kind of expose of the ‘thirteen ways to kill your lover’ scenario espoused in part two.

It seemed that the company and/or the Brighton Festival (who co-commissioned the piece) were seduced into the idea of creating a piece of work outside of a theatre space, without really thinking through what the relevance of the site was to the proposed piece, and how well the piece fitted this particular site. A common mistake made by many of those VPA students over the years – although one would hope that seasoned professionals would know better. Take the piece out of this site and it would be improved 100%.